High-profile signing Rudy Gestede will be restricted to a cameo role off the bench in Melbourne Victory's A-League opener against Brisbane Roar on Saturday night.

The 32-year-old former English Premier League striker has had just eight days' training with his new club after completing his mandatory quarantine period and is not yet at full fitness.

"He's come in later into the group and I want to protect him," Victory coach Grant Brebner said.

"I don't want to expose him just yet because he is an asset to me and the club.

"It would be foolish to put him in there straight away."

Fellow recruit Ryan Shotton is unavailable for the AAMI Park clash as he completes his quarantine period in Sydney and Socceroos winger Robbie Kruse is sidelined with a knee injury.

Kruse missed Victory's Asian Champions League campaign - brought to an end in the round of 16 by eventual winners Ulsan Hyundai - and is still "a number of weeks" away from returning.

"He's not full training yet but he is on the grass," Brebner said.

"With the injury he's had, we want to make sure we get him right."

Victory finished 10th in the A-League last season and turned over almost half their squad.

There have been hurdles in the club's preparation for the new domestic campaign, including a quarantine period on return from Doha before Christmas.

But Brebner was satisfied with his team's ACL performances, despite the inexperience of the squad he took overseas, singing the praises of Olyroos striker Ben Folami, midfielder Jake Brimmer and goalkeeper Max Crocombe.

And the 43-year-old Scot isn't shying away from A-League expectations at one of the biggest clubs in the country.

"I can't see why any Melbourne Victory coach would stand here and say that (just) making finals is where they want to be," Brebner said.

"We want to add to the silverware we already have and I wouldn't be enjoying my job if I wasn't set out to do that." 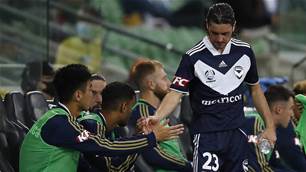