Craig Goodwin may be in red hot form but he needs more consistency if he’s going to break into the Socceroos team.

Goodwin was called into Graham Arnold’s upcoming Socceroos camp as a train-on member, meaning he won’t be part of the matchday squad against South Korea on November 17.

The 26-year-old forward’s failure to make the final 23 comes despite scoring eight goals in seven games since rejoining Adelaide United.

He also netted a double in his side’s FFA Cup Final victory over Sydney FC, winning the Mark Viduka Medal for best afield in the decider.

But the ex-Sparta Rotterdam man said he understood he needed to do more over a longer period of time.

“I think I need to do that but on a consistent basis,” Goodwin said. “It’s been a good start for me and the club as well.

“For me it’s about trying to deliver those performances on a consistent basis.

“I need to do that against Perth, who’ve probably been the best team so far this year. They’ve made some really good recruitments.

“I’ll be looking to have another good game there and hopefully help the team.

“I think it’s about putting in those type of performances consistently.”

Goodwin’s surge of form comes after his premature exit from Sparta in the Netherlands, having fallen out of favour under coach Dick Advocaat earlier in the year.

The Adelaide-born talent said he was content with his decision to return to Australia after two years in Europe.

“Coming back here it was the plan to do well and force my way back in,” he said. “I’ve now got the chance to show the new coaches and Graham Arnold what I can do in that environment.

“I’m really excited to go into camp and show what I can do in the training sessions.”

Goodwin was eager to impress in training to boost his case for selection in the squad for the Lebanon game on November 20.

He also remained hopeful of 2019 Asian Cup selection, even if he’s overlooked in the matchday squads for the upcoming friendlies.

“Whether I get game time or not or make the next squad, I have to focus on each day and doing my best in training,” he said.

“If I don’t get into those squads, it’s about coming back here with Adelaide and performing the way I have been.” 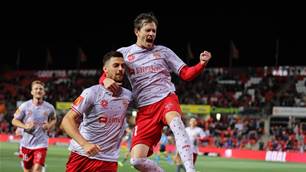