Western United veteran Andrew Durante says his distinguished 20-year career will finish at the end of the season.

Soccer stalwart Andrew Durante says he's made an emotional decision to finish his esteemed 20-year career at the end of the season.

And the Western United defender says it's apt to announce his retirement ahead of Saturday's away fixture against Wellington, where he spent 11 years.

"I have played on longer than I thought I would ... I have done everything I want to do in the game."

"We had a really good season and COVID disrupted it a bit and I didn't want to finish like that," he said.

"Everything kind of aligned now ... having a game back in Wellington, that is really fitting.

"I spent 11 years at the club and to be able to go back there and say thankyou to them as well was part of the reason why I decided to do it this week."

Durante won a NSL title with Sydney Olympic in his debut season in 2001/02 and an A-League title in 2008 with Newcastle Jets, when he was awarded the John Marston medal as best-afield in the grand final.

He moved to then start-up club Wellington the following season and joined Western United for their debut in the 2019/20 season.

"He is extremely respected among all his peers ... I have never heard a bad word said about him," Rudan said.

"He is an absolute professional. He has got that much resilience ... he has got a mental toughness that a lot of others can learn from."

Durante, who was born in Sydney but became a New Zealand citizen in 2013, leading to 24 international caps for the Kiwis, said he would likely remain in football in some capacity.

"I haven't really decided if coaching is definitely what I want to do, I have interest in the football operations side of as well," he said.

"At the end of this season i just want to take a break ... get away from the game for a little bit, clear my head." 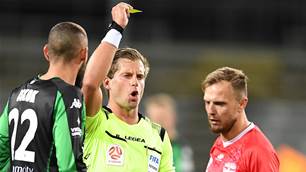