Zlatan Ibrahimovic has hit out at fans who displayed their frustration during Paris Saint-Germain's 2-1 victory over Nancy on Saturday.

Sections of the crowd at Parc des Princes whistled and booed when the French capital club fell behind to Benjamin Moukandjo's first-half strike, only for two Ibrahimovic goals to complete a reversal and seal three points for the hosts.

After the game the Swede was clearly annoyed by the impatience of some PSG fans and indicated he did not appreciate their reaction to the team going 1-0 down.

"They ask a lot," the former Inter and Barcelona striker told Le Parisien.

"This is strange in view of what they had in the past, because before, they had nothing.

"I've played in many big clubs and I know that nothing is ever easy."

Despite the result, goalkeeper Salvatore Sirigu appeared much more critical of his side's performance than Ibrahimovic and urged improvement in future games.

"We must get it into our heads that we need to be more aggressive," the 26-year-old said.

"We absolutely have to improve. It went wrong in Reims (a 1-0 league defeat) and it could have been the same this time." 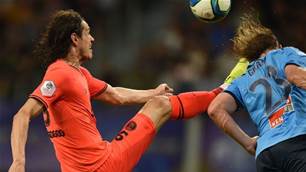