Just two points from a possible nine in the triumvirate of qualifiers against Japan, Saudi Arabia and China have seen the Socceroos drop out of the automatic qualifying spots for Qatar 2022 - and heaped uncertainty on their ability to recapture the form which had previously earned 11 successive wins.

Those heady days suddenly seem the eons ago, with Australia having four games left to rescue their campaign - home to Vietnam in January away in Oman in February and then a massive double header in March hosting Japan and then away at Group B leaders Saudi Arabia five days later.

The screeching loss of momentum has echoes of the Russia 2018 when Ange Postecoglou’s side only qualified after a torturous playoff lottery.

Lazaridis contends that Arnold’s team will avoid such trauma - on the proviso they defeat second placed Japan on March 24.

“It’s been disappointing, while Japan have won their last three we’ve been dropping points and we’ve missed the chance to have all but sealed qualification in the past three games (a 2-1 loss to Japan and draws against the Green Falcons and a hapless China),” Lazaridis told FTBL.

“The pressure is building now and it’s going to go down to the wire.

“Saudi Arabia look to have the top spot tied up and it looks to be down to between us and Japan for the second automatic place, along with Oman who also probably fancy their chances.

“The players have got to stand up now and handle the nerves and the pressure.

“I think we’ll be okay but we must take three points from Japan at home - that’s an absolute must. We need to take at least seven points from those next three matches.

“I’ll be extremely worried if we drop more points against Japan and have to go to Saudi Arabia needing to win there in the final group game.

“That Japan game really is the key match -  it’s a six pointer.”

Sixty cap Lazaridis, a torchbearer for Australians in England during his 11 seasons with West Ham and then Birmingham City believes the recent unavailability of Aaron Mooy, Tom Rogic and Adam Taggart ultimately proved costly, whilst uncharacteristic errors have also contributed to their undoing.

“Collectively as a team they’ve played quite well … Graham Arnold has done ok,” he added.

“It’s just a few mistakes have crept in plus not taking our chances - it’s been a combination of things.

“Losing in Japan was a major thing where we probably had the chance to kill it (qualification) right there and then.

“The absence of Mooy, Rogic and Taggart has hurt us and hopefully they’ll all be back for January. These players are the spine of the team.

“If Graham Arnold has his fully fit squad available from now on then I’m comfortable we’ll do what’s required.

“They’re all hard games but that’s what happens at this level.

“There are a lot of factors that have contributed (to Australia’s current predicament).

“I’m not going to pull any players down because I’ve been there and understand what they’re going through.

“Graham Arnold knows the expectation and the pressure and doesn’t need to be reminded.

“I think we need to be trusting of our players and the coach.”

Three wins from four would but guarantee automatic qualification but were Australian to fall into the payoff quagmire the third placed team from Group A would then stand in their way.

With Iran and South Korea already close to securing the top two places - currently in third place are United Arab Emirates, the team coached by Bert van Marwijk who led Australia at the 2018 World Cup.

The prospect of going head to head with Dutchman is a plot twist Arnold would like to avoid. 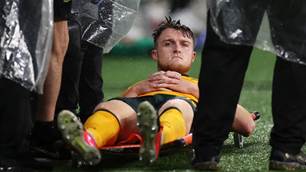