A grittier Melbourne City are on the verge of sealing their first A-League trophy and captain Scott Jamieson says it's the result of four years of work.

League leaders City will secure the premiers' plate with three games to spare if they beat Central Coast at AAMI Park on Saturday night.

In the past, City had long been known for playing attractive, high-scoring football but being unable to make it count in terms of A-League silverware - with the 2015-16 FFA Cup title their men's team's only trophy to date.

This season, the attacking flair remains but City are a far more gritty outfit and Jamieson, who joined in 2016, said the "humble" playing group's results reflected years of improvement.

"I don't like to talk on the club prior to when I was here, because I wasn't a part of it, I wasn't inside it," he said.

"But from an outsider, there was obviously a case of great football but just didn't have the steel, I guess, to be able to follow through.

"Throughout the years - the first season I was here, it was trying to strip things back and try and turn us into a team that won football games and won trophies.

"Unfortunately we didn't do that in the first year - but I think throughout my whole four seasons I've been here, there's always been an improvement ... in terms of results (and) behind the scenes and the way (the) football club's run from a player's point of view.

"There's definitely a system that has been implemented from the staff here through to the players - and the players pushing that in regards to getting better."

Jamieson, 32, is yet to win a trophy in senior football.

The full-back played in two losing A-League grand finals - and was unavailable for last season's decider - and has also been runner-up in the FFA Cup and Asian Champions League.

"There's no denying I'm dying for a trophy," he said.

"I don't downplay the minor premiership whatsoever. It's a trophy. It adds to a history of a football club, it adds to the fabric.

"I'll be very grateful for an opportunity by winning a football game on Saturday night and then hopefully winning many more trophies." 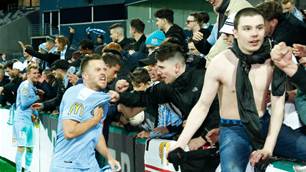