FIFA President Gianni Infantino has backed Australia and New Zealand to deliver the greatest Women's World Cup of all time in 2023.

After preparing a bid that could not be denied, FIFA president Gianni Infantino believes Australia and New Zealand are the perfect hosts to deliver the greatest Women's World Cup.

The trans-Tasman bid received 22 of the 35 valid votes from the FIFA Council on Thursday to pip Colombia for the showpiece event which will take place between July and August in 2023.

The tournament will be played in 12 cities in Australia and New Zealand, with the opening match to take place at Eden Park in Auckland and the final in Sydney.

"There will 32 countries unlike in France where we had 24 which means when you qualify for this event it is the biggest boost ever for women's football," said Infantino.

"We welcome that and I am sure we will have the best World Cup ever, in Australia and New Zealand."

The Australia and New Zealand bid outscored the Colombia bid emphatically in the evaluation report that was submitted to the council members.

It scored 4.1 out of five and bettered the South Americans, who scored 2.9, in every criteria - stadiums, team and referee facilities, accommodation, International Broadcast Centre (IBC), competition-related event sites and commercial.

Infantino said the report, which in the past has been no guarantee of a successful bid, was too good for him to not award his vote to - despite the nine-strong UEFA contingent voting in favour of Colombia.

"We have to show that these reports mean something or we are going to have to stop organising biddings," Infantino said.

"If that was not the case with the old FIFA well it won't be with the new FIFA and I am very proud of that."

"This is a huge positive for the footballing and sporting industries on both sides of the Tasman as we recover and rebuild from COVID-19," they said in a joint statement.

"As sporting nations we have had a long history of producing some of the best female footballers in the world and this tournament will further inspire our next generation and provide the platform for them to compete on the world stage."

FFA chairman Chris Nikou said the successful bid was an enormous opportunity to grow football in the region.

"FIFA today has made not one, but two countries very happy," said Nikou.

"We know there is a lot of work to be done.

"But our pledge to the FIFA family is that no stone will be left unturned to produce the best World Cup and grow the women's game globally and in the Asia-Pacific region."

FFA chief executive James Johnson said that work, to deliver a tournament in less than three years, had to begin as soon as possible.

"We get a weekend where we can where we can enjoy, we can relax a little bit but it starts Monday, we have a lot of work to do," Johnson told Fox Sports.

"It is the first ever co-confederation tournament so there's going to have to be a lot of positive engagement with a multi-stakeholder group."

New Zealand Football Federation president Johanna Wood promised the two nations would work together to deliver a tournament to remember.

"We have been given a treasure," Wood said.

"We will look after the treasure and make women's football even more front and centre and we will do that as a team." 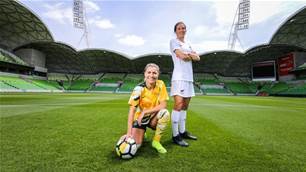