As a salary cap scandal threatened to shatter Perth Glory's stunning season four years ago, players were still being told it was all lies...and then their world came crashing down.

They quickly gelled as a group and reached the FFA Cup final before taking a runaway lead in the league.

But as news of a possible salary cap rort started to break, the club insisted there was nothing to worry – despite all the evidence to the contrary.

"It was complete bullshit," former Glory fullback Scott Jamieson tells the FTBL Podcast. "We kept getting told to our faces by Jason Brewer, the CEO at the time, that there's nothing wrong.

"But where there's smoke, there's fire.

"There were some big personalities there at the time like myself – I'm a small man but with a big personality – but also Vuka and Jake Burns.

"We kept believing them until the time we got the summons in the morning and we were told."

Illicit payments outside the salary to Keogh had been uncovered in a $400,000 rort, with the FFA banning Glory from the finals with a mandatory seventh place finish to the season and fining them $269,000

The blow was soul-destroying for the players.

"It was like the Melbourne Storm [NRL's salary cap scandal]," says Jamieson. "I can totally relate to watching that on TV, getting the popcorn and thinking, 'This is juicy...'

"Then flip that and I was in it – and I was fuming.

"You work hard and you have people that have the power and the responsibility to look after first of all the football club - but also the individuals...and that didn't happen. 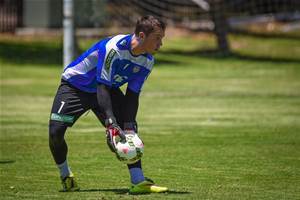 On the sidelines: 2014/15 Perth Glory squad in training

A quick flashback to the Perth Glory squad racked by the salary cap rort scandal as they trained in Sydney at APAI Leichhardt in December 2014.

Players feared the scandal would be the final straw for fans already fed up with Glory's management and owner Tony Sage, and expected a near empty stadium for the first match after the rort was confirmed.

Instead though, thousands turned out in a show of support.