No All-Stars match this time around, but these players would've ripped it up.

The tenth edition of the A-League concludes this Sunday, with the Melbourne Victory and Sydney FC battling it out for their third championship. As well, big-time teams such as Real Madrid, Manchester City, AS Roma, Liverpool, Chelsea and Villarreal are coming to our shores to play against each other (or against A-League clubs). However, there will be no All-Stars match like there has been for the past couple of seasons. To make up for that absence, here at Inside Sport, we have picked our team of the year. It is a squad that would've represented the All-Stars proudly ...

CB: Dino Djulbic (Perth Glory) - Amidst all the controversy surrounding the Glory, Djulbic always stood strong. Not only did he stop goals from going in, he also scored his fair share.

CB: Nigel Boogaard (Adelaide United) - Even though his track record seemed quite bad, Boogaard was an integral part that saw The Reds into the semis and a playoff spot for next season's ACL. He will be dearly missed as he returns home to play for the Newcastle Jets next season.

RB: Tarek Elrich (Adelaide United) - His performances for Adelaide put Ange on notice for Socceroos duties. Not only did he score the goal of the season against City when he waltzed through like Maradona, but he has been a consistent performer all season.

LB: Daniel Georgievski (Melbourne Victory) - The colourful Macedonian international (Blacktown boy at heart) earned his spot in the team after his great debut season in the A-League, scoring some cracking goals along the way to this weekend's grand final.

CDM: Mark Milligan (Melbourne Victory) - This man is underrated. How he has never scored an All-Star cap is beyond us. He can play anywhere you need him to and he'll always get the job done. Reason why he is a key part of the Socceroos.

CM: Milos Dimitrijevic (Sydney FC) - What a transformation the Serbian has had. He got over his fitness issues and has helped steer the Sky Blues into the grand final, as well sweeping all the club's end-of-season awards.

CM: Aaron Mooy (Melbourne City) - Since his move from the Wanderers, Mooy has proven that he is one of the best attacking weapons in the competition. Maybe Europe beckons for the Socceroo?

RW: Nathan Burns (Wellington Phoenix) - The move across the ditch helped Burns revitalise his career. His 13 goals also helped the Phoenix to their first finals appearance since 2012.

LW: Fahid Ben Khalfallah (Melbourne Victory) - The buy of the season, the Tunisian winger created havoc for A-League defences with his quick footwork and creativity. With Victory re-signing Ben-Khalfallah for the next two seasons, no doubt the Melbourne club will be challenging again.

ST: Marc Janko (Sydney FC) - This season's golden boot winner with 16 goals, the Austrian captain has been a nightmare with his power and precision. The move from Turkey has helped rejuvenate his career, with Austria on the quest for qualification for Euro 2016 in France.

Sub 1: Eugene Galekovic (Adelaide United) - The Socceroo is no doubt the greatest 'keeper of the first decade, but unfortunately for him, Janjetovic had the greatest season of his career.

Sub 2:  Matthieu Delpierre (Melbourne Victory) - He has been injured for most of the season, but every time the former Bundesliga-winning captain plays, there is a brick wall in the heart of Victory's defence.

Sub 3: Roly Bonevacia (Wellington Phoenix) - The former Dutch youth international surprised many people when he signed for the Phoenix, due to his age and the fact he was playing in the Dutch top flight. Signed as a cdm, Merrick had other plans, playing the Dutchman all over the midfield, even giving him a go up front. He rarely disappointed.

Sub 4: Alex Brosque (Sydney FC) - The prodigal son, captain courageous. Many nicknames come to mind when Brosque is mentioned. A consistent performer, who knows where the back of the net is, Alex Brosque is a key reason the Sky Blues will suit up for the final this weekend.

Sub 5: Besart Berisha (Melbourne Victory) - With 14 goals and seven assists, the Albanian has been instrumental for the Victory winning the premiership and getting into the final. Berisha is the first man ever to score ten-plus goals in four consecutive seasons.

Coach: Ernie Merrick (Wellington Phoenix) -  The Phoenix custodian transformed the Kiwi side from cellar-dwellers into championship contenders. The season may not have ended the way he wanted, but rest assured with this man at the helm, the Phoenix will be back next year. 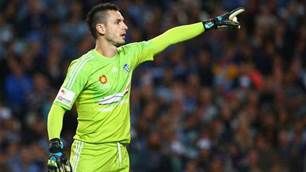 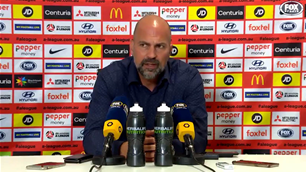