Iraq came back twice from behind to overcome Vietnam 3-2 in a fascinating encounter in front of 4,479 at Zayed Sports City Stadium in Abu Dhabi.

A beautifully struck free-kick by Ali Adnan produced a late winner (90’) after Vietnam had twice led following an unfortunate own goal by Ali Faez (24’) which put Vietnam in front before Mohanad Ali equalised when he pounced on a defensive mistake (34’).

Vietnam only previous Asian Cup experience was 12 years ago when they were knocked out by Iraq in the quarter-final with a 2-0 loss to the eventual 2007 champions, the only time in Iraq's history they have claimed the trophy

With the two teams having contrasting styles, this was an intriguing fixture and it didn’t disappoint in its entertainment.

The first threat by either side came in the 13th minute when Iraq's Hussein Al-Saedi’s shot was pushed around the post by Dang Van Nam. Moments later, from the resulting corner, Ali Faez headed not too far wide of the same upright.

In the 24th minute Vietnam’s first real threat saw them take the lead. A through ball saw Nguyen Cong Phuong put pressure on Iraq’s defence but when Faez, who was tracking back, contested the ball it clipped the back of his leg and went past the advancing Jalal Hassan into the corner of the net (0-1).

Iraq could have levelled in the 34th minute when Faez was given time on the edge of the area but he screwed his shot wide. His anguish was short lived as moments later he found the equaliser. Duy Manh took too much time on the ball and Faez was quick to take it away from him and fire a shot past Van Nam (1-1).

Three minutes before half-time Vietnam were back in front. Right-back Nguyen Trong Hoang burst into the box and fired in a low shot that Iraq’s goalkeeping captain Jalal Hassan could only parry and Cong Phuong was able to tuck the ball home (1-2).

On the hour mark Iraq found their second equaliser of the night. Van Lam kept out Mohanad Ali’s downward header and the forward’s follow up effort was blocked again but it fell kindly for substitute Humam Tariq who struck the ball high into the net (2-2).

Although Iraq were having more possession Vietnam were always swift and clever on the break and only a good save by Jalal Hassan from Nguyen Quang Hai’s left-footed drive kept his team on level terms.

In the 89th minute Nguyen Huy Hung brought down Safaa Hadi on the edge of the area and up stepped Ali Adnan to curl a lovely free-kick over the wall giving Van Lam no chance to produce a save (3-2).

With Iran defeating Yemen 5-0 in the other Group D game yesterday it means that Vietnam will almost certainly have to get a result against the competition’s highest ranked team if they are to make it to the knockout stages, while Iraq will feel confident of progressing for the eight time in their history. 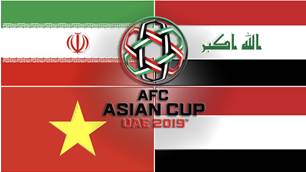 ASIAN CUP 2019 PREVIEW: ALL YOU NEED TO KNOW ABOUT GROUP D 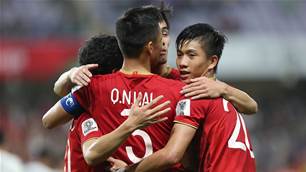