Jackson Irvine has lifted the lid about his controversial exit from Hull City, revealing he had no choice in staying on at the club.

Irvine was surprisingly let go by Hull at the end of June, along with captain Eric Lichaj, Stephen Kinglsey and Marcus Maddison, as the embattled side headed for eventual relegation.

The Australian midfielder was vice-captain of the Tigers and a key figure at the club. He made more than 100 appearances for the Yorkshire outfit since joining from Burton Albion in 2017.

Irvine's exit was stated by the Hull as a breakdown in talks, but the Socceroo claims there was no negotiations at all as he was cast aside.

"The club had an option to trigger my contract for another year, which they chose not to take,” he said.

“I read a few things over this period, a lot of people have had questions about what happened, and I read a lot of things about negotiations falling through – at the end of day there wasn’t any negotiations.

“I was offered no security or protection going into next season, and unfortunately that led to the decision kind of being taken out of my hands and I wasn’t able to complete the month of July with the team.

“That’s essentially how it went down from my point of view and I’m sure with the other players it was very similar. At the end of the day there wasn’t really any decision to be made.”

The Tigers will play in League One next season after finishing bottom of the Championship.

Irvine says it was “frustrating and disappointing” to watch helplessly as Hull slid out of the division.

“I couldn’t be more disappointed for them that their season has ended the way it has,” the 27-year-old admitted.

“I know what relegation means for a football club, it’s going to mean changes in staff and loss of players and loss of jobs for people working at the club. I know how serious the circumstances are.

Irvine is now a free agent has been linked with moves to the likes of Birmingham City and Sheffield Wednesday.

The former Ross County and Kilmarnock midfielder says his dream has always been to play in the Premier League but won’t rule out a possible move to Europe.

“Nothing concrete in the works yet, conversations are always ongoing,” he said.

“When it comes to where I’ll be playing Australians have always been known for being nomads – we’re happy to go anywhere – and I would love to continue playing in the Championship as well.

“The prospects of playing in the Premier League – that’s the dream – that’s why we all play at that level, that idea that you can push on to the highest level.

“But also for me, I’m open to new adventures and if something presents itself elsewhere that I feel aligns with what I want to achieve in my career, then I’m open to new opportunities.” 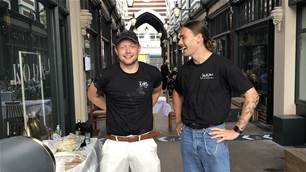