Socceroos Jackson Irvine and Martin Boyle were both on the scoresheet on Saturday, as Hibernian took on Motherwell in the Scottish Cup Quarter Final.

The pair nearly combined for a first half opener, Boyle picking out Irvine with a fine cross in the 40th minute, but the former Hull City midfielder was unable to head home from close range.

After a cagey first half, Hibs opened the scoring shortly after the break thanks to a powerful headed effort from Christian Doidge.

Jackson Irvine added a second with just ten minutes remaining, getting a slight touch on a Kevin Nisbet shot to grab his first goal for the Edinburgh outfit.

Despite the two-goal cushion, Hibs didn’t make things easy for themselves, allowing their opponents to score two goals in the space of four minutes to send things to extra time.

With neither side able to break the deadlock, the game went to penalties. Martin Boyle became the second Socceroo to get on the score sheet, slotting away his penalty to help Hibernian win the shoot-out 4 – 2, securing their spot in their fourth successive Scottish Cup Semi-Final.

The 28 year old duo will be hoping their continued success at Easter Road will further boost their chances of a call up for the upcoming 2022 World Cup qualifiers in June. 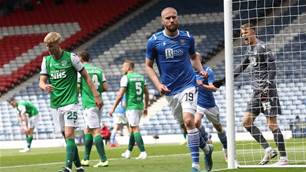