Sydney FC’s in-form striker Adam Le Fondre's ambition is to topple the regular season goals record of his predecessor Bobo, he has revealed.

When Bobo scored 27 goals in 27 games for Sydney FC in the previous A-League season, few expected that record to be broken any time soon.

Perhaps it's no surprise as Le Fondre, also known as ALF, is no stranger to record breaking feats.

During Reading’s 2012-13 EPL season, ALF won the club’s first ever Premier League Player of the Month award and broke the record for most EPL goals in a season as a substitute.

Some may think it's too early to make bold statements as only a third of the season is gone, but Le Fondre isn't shy when it comes to his aspirations in wanting to break Bobo's scoring feat.

“His goal record last season was incredible. I’m the first to admit that scoring 27 goals in 27 game season is phenomenal,” he told FTBL

“The fact he scored so many goals has given me something to aim for. It gives me something that I want to better and go up and beyond that.

“It gives me that drive to not just rest on my laurels and score just one a game and feel like I’ve done my job today because it’s not. I’m chasing things.

“I’ve always done that as a player. I’ve always chased something that has made me better and that is what I want to do.

“I’m going to have personal ambitions to do well which drives me. I thrive on scoring goals I’m just that sort of person.”

Le Fondre revealed the reason he’s been able to adapt so quickly into his new environment is down to Sydney FC’s set up.

“Ever since I came over in August everything, the club, the players, the whole structure of the place has really suited me,” said the 32-year-old.

“They have really helped me settle in. Albeit it’s the other side of the world, it’s not that hard or big of a change from home.

“For me it was a really easy decision to come out here and I feel vindicated because how I’ve started and how well we are doing as a team.”

While he has settled into the A-League like a veteran of the competition, Le Fondre admitted his knowledge of Australian football was limited initially.

“I did not know too much if I’m honest,” he said. “But when I realised this was a serious opportunity for me I did a bit of research about Sydney and what’s been happening in the last two seasons.

“There is nothing more attractive than a team who is winning every week then going and playing up front for them. I know I am going to get chances and score goals.

“I also spoke to one of my good friends Adam Federici. Obviously he is Australian and knows a lot about the club and he just said, 'You are going to love it!. Take the opportunity your family is going to love it.' 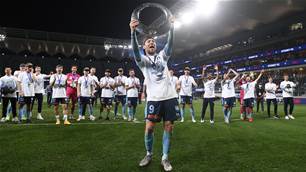