There's a whole new battle in Australian football, but it'll be fought behind the scenes at the 2019 A-League Grand Final.

Optus have a very short history in Australian sport.

They weren't branding the goalposts when Wollongong Wolves famously pipped the Glory back in 2000 and Bridgey wasn't commentating when Steve Corica lifted the inaugural Championship in 2005.

But their rise to significance, especially in the way Australians consume football, has been little short of meteoric.

While most conversations leading up to this weekend are (quite rightly) focusing on whether the glory days will return to Perth or Tony Popovic's final hoodoo will bottle it again, one underlying winner is already emerging.

Their broadcasting rights of the UEFA Champions League and Premier League have been a resounding success, sending a shockwave through Foxtel subscriptions and Fox Sports' A-League ratings as a result.

According to the always-thrilling Australian Financial Review, the organisation's sports streaming accounted for roughly 100,000 more Optus subscriptions in the quarter leading up to June last year than Telstra.

For a young and occasionally error-riddled service, Optus Sport's ratings have been dramatic - last Sunday's EPL decider accounted for a 100% increase in viewership and 50% increase in subscriptions.

Not that Foxtel's own subscription service, Kayo, isn't providing some competition: already enlisting about 200,000 of us by February and boasting the AFL, NRL and NBA rights that Optus could only dream of.

While streaming on Kayo and Telstra may have played a part, the bigger issue is more likely a drop off in football fan customers for Foxtel when they lost the rights to the EPL.

Even despite Optus's World Cup buffering fiasco last year, it hasn't stopped their streaming service from building a strong content base on top of strong figures, enlisting the likes of Mark Schwarzer, Ned Zelic and an aforementioned Newcastle Jets' old boy along the way.

This has helped them avoid the pitfalls of appealing to a globalised Australian football market without isolating rusted on domestic football fans entirely.

Now they've racked up another win out of nowhere: the last serious vestige of Fox Sports' Australian football coverage, the A-League Grand Final, an event that outdoes any match on Optus Sport for publicity and widespread media coverage, will be hosted at Optus Stadium.

Just a little jab in the ribs for Foxtel and 35% shareholder Telstra, in the wake of news of huge debts and expected sweeping cuts in the future TV rights deals for the pay-TV giants .

With a reported 50,000 tickets already lapped up, it's promising to be a resounding success out West and another foundation laid for the stadium's upcoming marquee football fixtures: Leeds United and Manchester United will play there in July.

More significantly, it also sets the stage for what promises to be the most important football event of the year, the Women's World Cup in June (also broadcast by Optus).

It's becoming increasingly clear that the future of sports broadcasting is in streaming, with the telcos already cornering the market.

But in the most saturated and fragmented sporting market on earth, where every millimetre gained is another inch lost, it's worth keeping an eye on the little battles here and there.

One day soon, they'll be the ones that win the war. 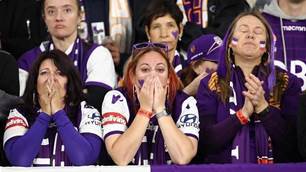