Ben Halloran opened the scoring and his account for the Reds after tucking home a deft flick from a Craig Goodwin cross on the stroke of halftime. He added a second straight after the break in similar fashion, this time Ryan Kitto the provider.

Adam Taggart was a centrepoint of the opening 45, hitting the post and directing a volley straight at Paul Izzo in acres of space, before immediately going down with a groin injury.

He's scored five goals this season to equal-lead the competition and Socceroos fans will be hoping it's nothing serious, almost as much as John Aloisi.

In a double-blow Eric Bautheac then departed on 55 minutes after a knee collision. It would have been enough to knock the stuffing out of Brisbane Roar, but a lethargic-looking United side let the Roar back into the match, Henrique bustling in front of Michael Marrone to sneak a tap in and make it 2-1.

Then the red mist descended.

Taylor Regan shouldered Stefan Mauk off the ball, before appearing to gouge at Mauk's eyes in the resulting fracas, earning a second yellow card.

A late challenge from Mauk minutes later caused him to slide into the back of Goodwin, who fell into the midfielder, knocking him unconscious. Upon recovering he received a red card for the challenge and left the pitch in a huff, while Kurz and Aloisi argued on the touchline.

Adelaide captain Isaias said he was "scared" when he realised Mauk was unconscious.

"We don't really know what happened," Isaias said. "I thought it was a rough tackle from Stefan but when we saw he was (knocked) out, we were really scared.

"Brisbane have a good team, when they scored one goal we had to look at the game, but we played well and we are happy.

"(Halloran) is doing really well, even when he wasn't scoring he was working really hard, so were really happy with him."

It was a nervous and tumultuous end to the match for Marco Kurz's side, who still ended the victors, on a very unseemly note for the competition.

The result moves Adelaide up to second, two points behind Perth Glory while sixth-placed Brisbane enter a run of four-out-of-five away games with only one win on the board.

Dylan Wenzel-Halls, a prolific new recruit from the Queensland NPL's Western Pride, came on and made an impact without proving the difference, but was pleased with his efforts.

"My job is just to come on, make an impact and provide energy," Wenzel-Halls said. "It was a strong tackle from Stefan Mauk but the retaliation was not needed.

"The pace was immense, it was so quick and you have no time to relax. But that's what you want to be a footballer for." 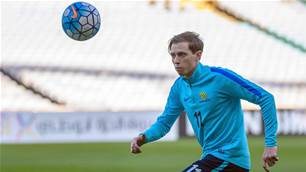 Goodwin: I want to go back overseas