Perth Glory CEO Tony Pignata says Daniel Sturridge's move to the struggling A-League Men club has been a failure and it's unlikely they'll extend his deal.

Perth Glory's gamble on Daniel Sturridge has been labelled a failure by chief executive Tony Pignata, who admits it's unlikely the English striker will be offered a new deal with the A-League Men club.

Sturridge, a former Liverpool forward with 26 England caps, was the highest-profile signing heading for the 2021-22 A-League season but has featured for just 93 minutes across five substitute appearances -- failing to find the net.

The 32-year-old's last game was against Macarthur in late February, coming on at halftime before limping off with a groin injury just 15 minutes later.

While Pignata believes Sturridge could yet feature before bottom-placed Glory's miserable campaign ends, he doesn't expect his time at the club to extend beyond this season.

"It has been disappointing. We had high hopes when we signed Daniel. It hasn't worked," Pignata told SEN's The Global Game.

"From a marketing point of view, the first game, we had 18,000 on the back of him arriving and the hype. Then unfortunately he got injured ... and he hasn't been seen since.

"He's training and there's potential that he could play some minutes this week and then finish off the season.

"Next year? Look, I doubt that we'll offer him another contract."

Sturridge's underwhelming stint in Australia has been one of several disappointments for the Glory in a campaign ravaged by COVID-19 border restrictions, injuries and fixture disruptions.

Pignata said the decision to part ways with coach Richard Garcia last month hasn't had the expected effect on the squad, with interim boss Ruben Zadkovich launching into an extraordinary attack on underperforming players in the wake of a 6-0 hammering by Western United last weekend.

With financial difficulties mounting and a long injury list, Pignata said he doesn't expect the team to snap their long winless run -- now at 14 games -- to avoid the first wooden spoon in the Glory's history.

"We won't win another game," he said.

"The last three games, I don't think we win.

"I know Ruben and Coyney (assistant Chris Coyne are doing the best they can with what they've got and it's been tough on them but we'll be out there every week regardless trying to pick up points.

"It is going to be hard but the rumours about the club being in disarray, the players' discontent, that's incorrect to be honest. That's totally false."

Pignata said Glory were aiming to have a permanent coach appointed by the end of May and Zadkovich remains "in the mix", despite Perth picking up just one point from his seven matches at the helm. 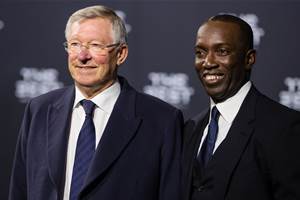 Dwight Yorke has emerged as an early contender to bring the pizzazz back to stricken Perth Glory by taking the coaching reins next season.