Still upset about his team missing on what he feels was a late penalty in Tuesday's A-League loss to Melbourne City, Sydney FC coach Steve Corica believes it's time football clarified the game's handball law.

Corica thought his team had been denied a clear penalty late in the 3-2 loss to City at AAMI Park as the Sky Blues pressed for a late equaliser.

The non-call came after a controversial evening in Adelaide last Friday where the Reds claimed a 3-2 win over Central Coast with all of their goals coming from penalties.

After Adelaide's win, Australian Professional Leagues commissioner Greg O'Rourke said at least two of the penalty decisions were incorrect, crucially though not the one given against Mariner Kye Rowles for handball.

Corica said he wasn't upset at VAR or the referees but argued the lack of certainty about what is and what isn't a handball is more to blame.

The International Football Association Board (IFAB), who determine the laws of football globally, introduced several sub-rules to the handball law last season, including if a ball strikes a player who has made their body "unnaturally bigger".

Under that determination, IFAB argues an arm above shoulder height is rarely, if ever, in a "natural" position and should be punished as handball with the sole exception being when a player is falling to the ground.

"If your hand's up like that, it's handball," Corica said.

"Probably a little bit inconsistent with the ruling and that needs to change, I think. Balls are hitting hands and we don't know if it's handball or not.

"Obviously we've got VAR to make the right decisions, it might just be the rule itself that needs to change."

Despite the non-penalty decision, Corica says his team didn't deserve a point against City after a poor first half and will have to get better for Sunday's derby against Macarthur FC.

"This game on Sunday's a different style of football and we've got to make sure that we're ready for this game." 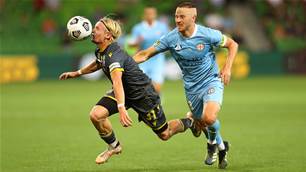