A clinical display by Wellington has delivered the Phoenix a 3-0 A-League win over Perth in Wollongong.

A clinical Wellington have secured back-to-back A-League wins for the first time in almost 12 months with a 3-0 victory over Perth Glory.

First-half goals by Reno Piscopo and David Ball and Ben Waine's second in as many games in the second term sealed the Phoenix's first win at their temporary Wollongong home for this season.

It's also the first time the Phoenix have won back-to-back matches since March 15 last year.

The Glory, who had been out to bounce back from last Tuesday's 2-1 loss to Central Coast, will wonder how they didn't get something out of a match that they dominated for large periods.

The visitors had all the ball in the opening 20 minutes with Irish striker Andy Keogh's 18th-minute effort narrowly ruled out for offside.

Despite their dominance, Glory fell behind in the 30th minute with the Phoenix's first strike.

Piscopo picked up the ball in the centre circle, drove to the edge of the box and arrowed a right foot strike into the opposite corner.

One became two just five minutes later when Daniel Stynes lost possession and Ball tapped in at the back post from a pinpoint James McGarry cross.

Teenager Waine, who scored in last weekend's win over Newcastle, sealed the victory early in the second half when he bundled home after a goalmouth scramble in the 59th minute.

Glory's day was epitomised moments after Waine's goal when Phoenix goalkeeper Oli Sail twice denied Bruno Fornaroli from point-blank range and then got up to deflect Stynes' goal-bound effort from the rebound.

Phoenix coach Ufuk Talay, who donned a tracksuit for the second week running at the behest of his players who feel it is a good luck charm, said the both the clean sheet and ruthlessness in front of goal by his team had pleased him.

"They have very influential players and we nullified the space for them to be influential," Talay said.

"Then we were clinical when we got up to the other end of the goal.

"It was a win that we needed. It was our first win playing at WIN Stadium and hopefully this gives us the momentum to move forward."

Glory coach Richard Garcia said his team's disappointing day has to be used as a learning experience.

"We know where we need to improve and the main thing is that we're coming away from home and putting in those performances, where we are being dominant in that front third," Garcia said.

"We just need to be able to then tighten it up in the back end."

The Phoenix will chase a third successive win when they take on Western Sydney on March 15 at Bankwest Stadium while Perth stay in NSW to face the Mariners in Gosford next Sunday. 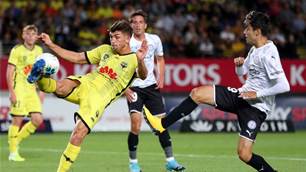