Central Coast will host Sydney FC in round 20 of the A-League on Sunday, fresh off the Sky Blues' Asian Champions League loss.

Sydney FC's 4-0 loss to Yokohama F. Marinos in their first game of the Asian Champions League could not have come at a worse time for Central Coast.

Before taking the field in Japan on Wednesday, the Sky Blues had not played a game in three weeks and were seriously outclassed by Ange Postecoglu's J-League champions.

Now returning to Australia with their tail between their legs, the Sydneysiders will be desperate to remind everyone why they're the A-League leaders against the Mariners on Sunday.

"Sydney's been the best team in the A-League for not just this year but the last three or four years so one loss, I'm sure they'll be smarting from that loss but there's such a winning mentality in that group and in that club," said Mariners coach Alen Stajcic on Friday.

"I'm sure they're going to want to bounce back quickly and come back even bigger and better.

"It's probably even worse for us that they suffered such a loss, they're going to want to come back even hungrier and more determined than what they've been all year."

With no serious injury concerns after their AFC loss, the Sky Blues are expected to field a near full-strength team against the bottom-placed Mariners at Central Coast Stadium.

Stajcic's side are on a five-game losing streak and are coming off a 2-0 loss to Adelaide in round 19.

However, despite the scoreline Stajcic thought the Mariners were the better team against Adelaide last week, calling it one of their best performances of the year.

"It just shows that we're building, slowly," he said.

"There's lots of good things going into this game and coming from even the position that we're in, where we haven't won for quite a while now, and there's still so many positives that we have to draw on and build on to add to the belief that we can compete with anyone on any given day."

Earlier this year the Mariners pushed Sydney in a 1-0 loss at Netstrata Jubilee Stadium.

* Central Coast have lost their last five A-League games in a row; the last time they lost more in succession was a 10-game stretch from November 2018 to January 2019.

* Sydney FC have lost only one of their last 16 A-League games against Central Coast Mariners (W12, D3) and are undefeated in their last six meetings (W4, D2).

* Alexander Baumjohann (Sydney FC) has provided four assists for Adam Le Fondre this A-League season, the joint-most of any player for a teammate this campaign. 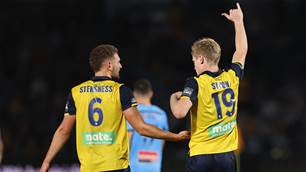 'They have definitely got it wrong' - Mariners, Sydney share points