Sydney youngster Calem Nieuwenhof's season is almost certainly over after scans revealed he has suffered a fractured vertebrae.

The A-League season of midfielder Calem Nieuwenhof is almost certainly over with scans showing the Sydney midfielder has suffered a fractured vertebrae.

The 20-year-old has been sidelined since the Easter weekend with a back problem, a recent bone scan revealing the full extent of the issue.

It means Nieuwenhof will miss at least the next eight weeks to allow the fracture to heal.

"It's good to get some clarity but it's also disappointing because I know it has probably ruled me out for the rest of the A-League season, which I was enjoying," Nieuwenhof said.

"If anything the injury has made me more motivated to perform well, and I want to push for more games in the first team."

After featuring in every match of Sydney's Asian Champions League tournament in November, Nieuwenhof has made nine appearances in his first A-League campaign with the Sky Blues, scoring in round two against Wellington.

While his A-League season seems over, Nieuwenhof is hopeful he'll be back in time to feature in Sydney's upcoming ACL campaign, starting in late June.

"That's what I'm aiming for, but time will tell," he said. 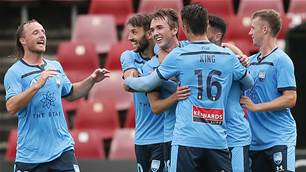 'Nothing seems to faze him...' - Sydney stunners seal win