“I like [new FFA CEO] James Johnson, from what I’ve read from him, the transfer fee things I think is a great initiative too, bringing in transfer fees.

“I haven’t got in-depth into it but he’s talking about connecting NPL clubs and them receiving payments for producing players. I think that can only benefit NPL clubs to enable them to invest in their coaches, their academies so A-League teams, if they do choose to sign them, they get a fee.

Jamieson was speaking on the eve of a personal milestone, set to play his 250th A-League game against Brisbane Roar on Sunday.

A graduate of the Westfield Sports High and a Blacktown City junior, Jamieson, assuming no last-minute pratfalls emerge, will join just 12 other players to have accomplished the feat when he runs  onto AAMI Park on Sunday evening – although he’s got a way to go before he catches Andrew Durante’s record of 331.

The 31-year-old has racked up the frequent flier miles on his way to the milestone, previously on the books at Adelaide United, Sydney FC, Perth Glory and Western Sydney Wanderers in the A-League and Bolton Wanderers and IFK Göteborg overseas.

City, however, recently became the club where he has played the most games – his 67 appearances at the club eclipsing the 55 he had with Perth Glory.

“At the end of the career, it will be interesting to see how many I rack up but that’s a little thing I’ll look on before the weekend and then get back to it.

“Coming here was a long term thing, I signed a long term contract. Prior to this, I think the longest was probably Perth Glory.

“But you know I’m a Western Sydney boy and Western Sydney was where I though was going to end my career in terms of clubs but for whatever reasons I ended up going overseas.

“But since I’ve come here I’ve really enjoyed the ride for what it’s been.

“Obviously very disappointed I haven’t had any trophies to add to that but I still think there’s another four of five years, touch wood with injuries, that I can rack up some trophies with this club and help leave a mark and leave something that the club can build on.” 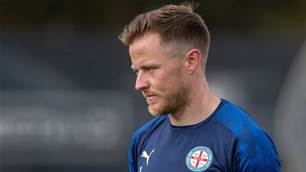