Sydney FC have been left to rue their wastefulness against Jeonbuk Hyundai, with a 1-0 loss effectively ending their hopes of getting out of ACL group H.

Sydney FC are once again set to miss out on the Asian Champions League knockout stage after a 1-0 loss to Jeonbuk Hyundai effectively ended their hopes of progressing in Qatar.

Na Sung-eun handed Jeonbuk the lead in the 44th minute and Sydney were never able to peg back the deficit, with the A-League champions left to regret their wastefulness at Al Wakrah Sports Complex.

Sydney had only progressed past the group stage once in their five previous campaigns - reaching the round of 16 in 2016.

They are winless from four games and anchored to the bottom of group H with one point and a poor goal difference, and have just two matches - against Shanghai SIPG and Yokohama F. Marinos - remaining.

The Sky Blues impressed early and almost scored in the 26th minute when Trent Buhagiar whipped in a tantalising ball but Kosta Barbarouses' scrambled toe-poke was well off-target.

On debut, Sydney goalkeeper Adam Pavlesic had a moment to remember when he bravely blocked Gustavo's close-range effort in the 31st minute.

Rhyan Grant did brilliantly to pick out an unmarked Buhagiar on the penalty spot, but the striker dragged his shot wide.

Na Sung-eun received the ball in space and his scorching shot nutmegged Michael Zullo, taking a slight deflection and nestling in the bottom corner.

Sydney's intensity didn't drop and they continued to pepper Jeonbuk's goal after the break.

Milos Ninkovic, who was excellent throughout, had a chance saved in the 61st minute, while Barbarouses clipped the side netting two minutes later.

Three minutes later, Buhagiar hit a golden opportunity straight at Song - and from there, Sydney were left to rue what might have been. 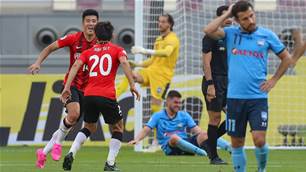