With the A-League in hibernation mode, Western United have confirmed that midfielder Dario Jertec has departed the club to head back to Croatia in the midst of the coronavirus crisis.

Jertec, 34, signed with United on the eve of their first season in the A-League, making his debut in the club's round one win over Wellington Phoenix and going on to make 15 appearances.

"We thank Dario for his efforts both on and off the pitch in our first season, he will forever be part of Western United's history with his role in the founding squad," Western United CEO Chris Pehlivanis said.

Beginning the campaign as a fixture in Head Coach Mark Rudan’s starting XI, the Croatian battled injuries in the weeks ahead of the A-League’s suspension, only making a single appearance between rounds 16 and 22.

"I wish the club all the best of luck and success in the future and I will always remember these beautiful moments and being part of the history of Western United."

Pehlivanis told The Age on Thursday that the decision to issue the notices to the club’s playing group was one made with the future in mind – and that the expansion side would pay its players and staff if Fox Sports quarterly rights payment was delivered.

Player's union Professional Footballers Australia had initially threatened legal action against any club that moved to stand-down their playing group, but last Friday reached a ceasefire with club body the Australian Professional Football Clubs Association and agreed to begin talks over the A-League's future. 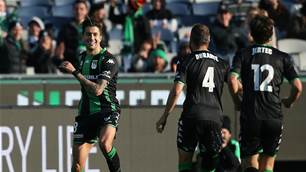