Newcastle A-League stalwart Jason Hoffman says it's time to get rid of the Adelaide United bogey.

Hoffman says the Jets have travelled to Adelaide for Sunday's A-League twilight fixture with a score to settle after a recent run of outs against the Reds.

Adelaide haven't lost to Newcastle in their past five league games.

United have lost just one of the past eight clashes against the Jets at their home ground, Coopers Stadium, having also beaten Newcastle 1-0 earlier this year in a FFA Cup quarter-final.

Their last meeting, in round three of the league, finished in an Adelaide 2-1 win - a result which still rankled Hoffman.

"That was a game we felt we should have won," he said.

"We were obviously really disappointed with that one, and you go back to the FFA Cup one as well. Unfortunately, we went down to 10 men early and they have us one there.

"Adelaide, people are saying it's a bit of a bogey team for us.

"But I'm more than confident that we have a good enough squad. The performance, first and foremost, needs to be good and I feel it will be come Sunday and that will be enough to get the three points."

Adelaide (12 points) sit third on the ladder ahead of hosting the seventh-placed Jets (eight points).

But the Reds have lost attacking linchpin Riley McGree, who has scored six goals in the opening seven league games, to a knee injury.

"For us, we don't really want to focus on the other team," says Hoffman, who has signed a two-year contract extension with the Jets.

"Pretty much all the games this year other than Sydney, we have put together a performance that was worthy of winning.

"So for us to finally turn it into results in the last few weeks has been pleasing. So we will focus on ourselves again and we're confident."

* Newcastle have beaten the Reds in Adelaide just once in the past eight league games, with five losses and two draws

* The Jets have kept a clean sheet in their past two games. The last time they managed that feat three times in a row was in January 2013

* Newcastle have the highest shooting accuracy (excluding blocks) of any team in the league, at 58 per cent. 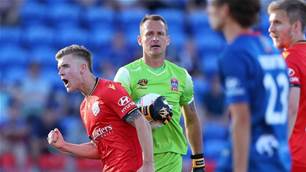 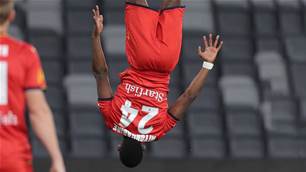