Joeys coach Trevor Morgan is pleased with the progression of his team after they defeated Korea 4-3 on penalties.

The Joeys are currently in the UK taking part in a four nation Under-18s tournament. Matches against England, Korea and Brazil are part of the preparation for the Under-17 World Cup that kicks off next month.

Australia's Under-17s went down 3-2 to England on Friday and were held 3-3 by the Koreans at full-time, before going on to win the penalty shootout.

Morgan was happy with the performance of his side, which did not feature TSG 1899 Hoffenheim's Noah Botic or Southampton's Caleb Watts, against Korea at St George's Park and believes they are improving.

"We’ve raised the level and we would have surprised Korea a bit with our quality and how we played in the first half," Morgan told FTBL.

"That’s a good measure for us, the improvement. There is a talent across the pitch in different positions. Obviously against Korea we didn’t use Caleb or Noah at all, and Ryan Teague played 15 minutes.

"I think we can definitely be another 30% stronger than what we started against Korea there. It was a useful match for us.

"For the boys that played the full match, they’ll recognize that they need to keep playing at the same level and intensity right through a match, and we’ll be able to put out the simple little areas where you don’t maintain control of the match.

"For us it’s a still a top test, I think it shows that a team that beat us quite convincingly – in everyone’s opinion anyway – at the AFC last year, that’s there been more improvement on our side." 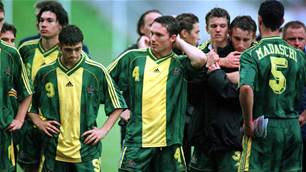