Johan Cruyff’s wizardry proved a true “turn” for the worse for opponents. Add the “total” football philosophy and he was truly unstoppable.

Johan Cruyff’s wizardry proved a true “turn” for the worse for opponents. Add the “total” football philosophy and he was truly unstoppable. 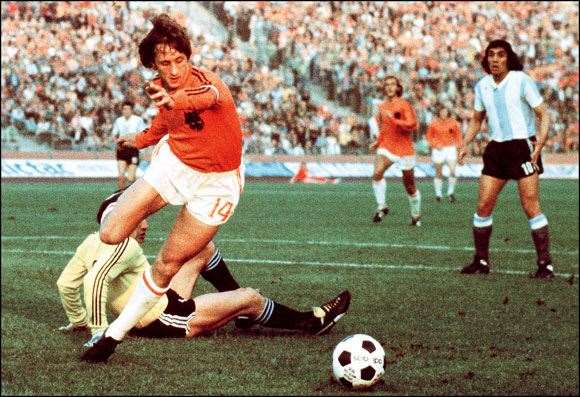 Comparisons are never fair, and rarely are they as scientific as they pretend to be. It’s not fair that Johan Cruyff should be held up against those wonders of the world game, Pele and Maradona. A refined aesthetic sensibility would find such judgment as distasteful as comparison of a ballet master with a world salsa champion. One is a stylised European invention, born of systematised training, discipline and fitness, while the other is a dance of passion, individual expression. The best exponents of either are simply sublime. As they rise, they converge.Truth be told, the Dutch football legend Cruyff (born Hendrik Johannes Cruijff) compares favourably with anyone. He was the greatest exponent of the “total” football system of Ajax Amsterdam coach Rinus Michels – who rates an Innovator of his own. In fact, Michels’ system would barely have been possible if not for the far-ranging individual talents of Cruyff. Between them, they made the Netherlands teams of the 1970s the most flamboyant and stylish in the world.The “total” football system is much like today’s workplace idea of the self-managed team, in which everyone is equipped to perform everyone else’s function. The point is that, even if they are never required, team members’ acquired abilities are ready to be used.

Total football meant that players were able to move out of position at will, or at the coach’s request, perform someone else’s role, and be replaced by another just as competent in their former role. Skill levels needed to be up to such an organic system, regardless of natural strengths and weaknesses. It’s doubtful players from contemporary South American sides would’ve survived the rigours of this exacting scheme.With his remarkable array of skills, Cruyff managed to turn Michels’ theory into breathtaking action.Coupled with Cruyff’s physical abilities was his skill as a weaver. Like a chess Grand Master playing 100 games at once, Cruyff had a supernatural ability to assess team-mates’ positioning and potential effectiveness. His complex and precise passing led him to be dubbed “Pythagoras in boots” by British sports writer David Miller, who also wrote of Cruyff that “few have been able to exact, both physically and mentally, such mesmeric control on a match from one penalty area to another”.

Cruyff, nominally centre-forward under Michels, was able to drop into defence or onto a wing, bamboozling his markers. The fact he was perfectly capable of sustaining such a style, morphing from one type of player into another, obscures Cruyff’s individual, God-given talents.The “Cruyff Turn” was, and still is, considered nothing short of wizardry, especially when we witness it in real time and understand the pressure Cruyff was normally under when he produced it. By flicking the ball behind him and off to the right or left, often at full pace and in the middle of a penalty box gridlock, Cruyff was able to instantaneously make space, change the direction of play and lose a close marker. Not just anyone could perform the Turn, even if they mastered its choreography. Cruyff’s acceleration and speed enabled him to pull it off. The burst away after the ball was crucial to its execution.The Turn – unveiled in one astounding moment in the 1974 World Cup against Sweden, when Cruyff had defender Gunnar Olsson taking off in the wrong direction and proceeding five metres before realising Cruyff wasn’t there – was a moment of revelation that was disorienting even for viewers, as though time had suddenly stalled. 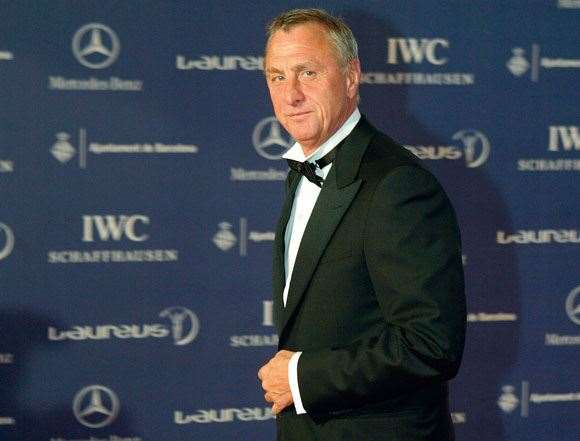 Soon every player in the world was trying to emulate it, but Cruyff owned the move, much as Pele owned his “runaround”, or Ronaldo his “stepover”.That World Cup should’ve been to Cruyff what 1986 was to Maradona, or 1970 to Pele. He was easily player of the tournament. The Netherlands breezed through the world’s most formidable teams thanks to their total football approach and Cruyff’s implementation of it. Argentina went down 4-0 (Cruyff scored two), East Germany 2-0 and Brazil 2-0 (Cruyff netted the second). Despite their obvious superiority over the host team West Germany in the final, the Dutch stumbled, squandering an early 1-0 lead, and a frustrated Cruyff received a yellow card for referee abuse. The Netherlands scored 15 goals in that World Cup, and every one of them began or ended with Cruyff.Though he won three European Player of the Year awards, three European Cups with Ajax, and that FIFA Golden Ball, Cruyff only ever played one World Cup. In 48 games for Holland he scored a record 33 goals.As a coach and manager, Cruyff has been every bit as controversial, visionary and enigmatic as most expected him to be. Like all great thinkers, he sees simplicity in complexity, and has been so far ahead of his time that many of his successful methods are still untried. All aspects of his career considered, he’s the most accomplished soccer figure of all time.Cruyff was voted European Player of the Century and rated second behind Pele in a poll to determine World Player of the Century. But, again, such comparisons are odious. Like few before or since, in soccer’s pantheon, Cruyff, the brilliant stylist, the consummate team tactician, the philosopher, deserves nothing less than five-star treatment.