After going down 4-0 to Manchester City on Matchday 1, the Dutch champions faced a tricky away trip to Serie A leaders Napoli on Tuesday.

However, it was another tough night for Jones and Co., losing 3-1 at the Stadio San Paolo in Naples.

It took just seven minutes for Lorenzo Insigne to open the scoring for Napoli, before Dries Mertens made it 2-0 just after the half time break.

Napoli dominated the majority of the second period and sealed the three points with a goal from Spaniard Jose Callejon on 70 minutes.

Feyenoord pulled one back in stoppage time through Sofyan Amrabat, but it was merely a consolation for the Eredivisie side.

Feyenoord are bottom of Group F without a point. Manchester City lead the group with six points, with both Napoli and Shakhtar Donetsk on three.

The top two in the group advance to the Round of 16, while the third-placed side move into the Europa League Round of 32. 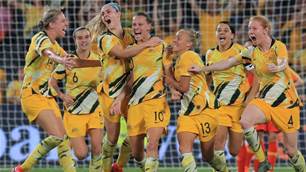 Our top five performing Matildas in the last 12 months