Jordan Murray scored his first A-League goal on New Year’s Eve but admits the big moment was overshadowed by yet another disappointing performance from the Central Coast.

The Mariners were beaten at home 4-1 by table toppers Perth Glory and become the first side (A-League or NSL) to go an entire calendar year without a win.

But Murray, who has put in the hard yards to earn an A-League contract this seasoon, did his best to rally the troops post-match.

“It’s been a tough few years, so I’m happy with the goal but I would’ve preferred the three points,” he told Fox Sports.

“Perth Glory are…tough opposition, they’re at the top of the ladder. So, I’m happy with the goal but I’m more focused on making Central Coast Mariners back where they should be.

“It’s hard when you’re not winning. But we believe, eventually it’s going to come. We’ve just got to keep working hard and like I said it will come.”

Mariners signed the NSL NPL record-breaker from APIA Leichhardt Tigers in August after he bagged a staggering 23 goals in just 19 games.

With the side down 3-0 on Monday night, Coach Mike Mulvey made an attacking substitution at the break bringing on Murray for Jack Clisby.

And the forward made his move in the 77nd minute, getting on the end of some good lead up work by Tommy Oar and Matt Simon.

But a brace from Andy Keogh (3',90+2') and former Mariner Fabio Ferreira (23', 41') made it another miserable night for the one-time A-League Champions who sit on two points after 10 rounds.

Murray “speaking from the heart” assured fans that the “boys are putting it in at training.”

“We still believe. We’ll get there eventually,” he said 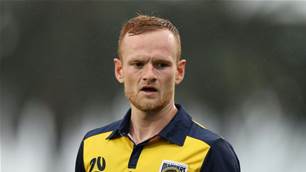