It was the first time Oldham had progressed to the competition's second round since 2016 and they did it in style, showing Kewell's attacking, win at all costs mentality.

The win in his first competitive fixture capped off a great first run of friendly results since Kewell joined the troubled club, which finished 19th last season and have a dire record with owner, Abdallah Lemsagam.

“It’s different because it’s a cup game and you can throw people forward, so we knew it was going to be a challenge but I felt the players did rather well,” he said.

“We had to adapt, at the start of the game we played our way but we know in League Two you can bombard people with high balls and crosses and I felt Carlisle came out in the second half and threw everything at it.

“When you do win, everyone’s happy, but we can’t look too much into the future, we’ve got to take each game as it comes.

“It’s a fantastic result and we want to be part of the Carabao Cup into the next round and we’ve achieved that today but now we reset ourselves and look forward to playing next weekend.”

Talking to the Oldham Times earlier this week, Kewell said that despite at least two of the club's recent previous coaches, Dino Marra and Paul Scholes, leaving partly due to Lemsagam's influence on transfer policy, he doesn't mind.

“When the owner (Abdallah Lemsagam) and sporting director (Mohamed Lemsagam) ask me for my opinion (on potential transfers), we’ll talk about it.

“They’ve been very open about it, we’ve talked a lot about the players and the players that have been brought in, we’ve all agreed that they’re the players we wanted at the club.

“From the moment I walked in, we are a small group but everyone here is pulling in the same direction,” he added.

“I think it’s been fantastic, I’ve been at clubs before who have done the same and if you can get that community - we’re all fighting for each other.

“I’m happy with the players that I’ve acquired, I think they’re bringing something different.

“Everyone’s always going to be looking for that extra one or two players but I think the core is there and now we have one or two areas to strengthen.

“We’re always open and looking, the transfer window is still open and you never know what can happen.” 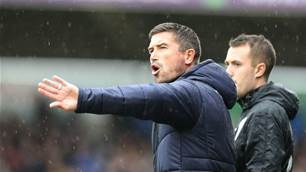