Kewell and Viduka's careers dovetailed with each other, with the pair spending 11 years together up front in the national team and four seasons at Elland Road.

For a period they shared the same agent, but fell out while part of the starting XI at Leeds in the early 2000s.

But Kewell has praised the 44-year-old striker's abilities on the field.

"He was a fantastic player, one who is easy to play with," Kewell told France Football.

"I needed an anchor, someone capable of freeing up space. And Mark did it very well, whether with Leeds or the Socceroos."

Kewell played 58 times for the Socceroos and appeared in the 2006 and 2010 World Cups. But the 41-year-old said he never really considered himself an ambassador for Australian football.

"I never paid too much attention to this," he said.

"I was a professional sportsman who played football. I have always loved this sport but I also considered it all as my job, doing my best from start to finish. Quite simply."

Asked about the difficulties Australians face in making it in Europe, Kewell believes it is all about mental toughness and hard work.

"Some people find the excuse of the climate, of the rhythm, or whatever," he said.

"But if you want to play in Europe, you have to work hard... it's that simple. You just have to put everything you have, maybe a little more.

"You don't have to be shy, trust yourself and listen to your manager (laughs). Because in the end it is him that you will have to impress." 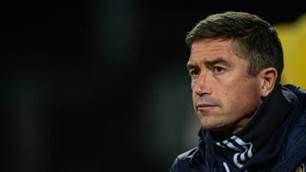 Kewell: The kids need to toughen up