The traditional Christmas Melbourne Derby has extra spice given the position of both City (2nd) and Victory (3rd) on the table.

City’s first piece of silverware came after a 1-0 win over Sydney at AAMI Park a fortnight ago and the rematch ended level with Sky Blues coach Graham Arnold deeming the performance as the club’s best this season.

And after City squandered the lead due to a penalty, Kilkenny believed they should have held on.

“We should have won the (Sydney) game really, once we were 1-0 up… I won’t comment on other situations,” Kilkenny said.

“We know we didn’t play the best game possession wise and the way we normally play, but at the same time, we probably should’ve won. Fair play to Sydney to try and stop us.

“Teams know what we’re good at and know we want to dominate possession, sitting behind the ball and trying to hit us on the break.

“I know people talk about how Victory is an entertaining team, so hopefully they’ll come out and try and do that.”

The spotlight placed on City in the past fortnight has been down to the physicality which was called out by Brisbane Roar coach John Aloisi.

Kilkenny’s said the attention placed on the club would be beneficial.

“We know as a club, teams are going to try and say stuff about us, we just go out and play our own game,” he said.

“If managers, clubs and the press want to talk about us, that’s a compliment to us in the way we play the game.”

FareShare relies on volunteers and cooks 5000 meals from surplus food collected at supermarkets, from farmers and other business which would otherwise be wasted.

Kilkenny said it was important to get involved as a footballer.

“We know we’re privileged, this puts it into perspective as well. It’s nice to get out here and help,” he said.

“With Christmas coming up, even more-so because it’s sad they’re not spending it with their families. It’s a fantastic cause and I’ve enjoyed myself at the same time, so it’s been very enjoyable.

Great to give back to the community & those in need at an important time of the year. Thanks to @Fareshare1 for today! " @MelbourneCity pic.twitter.com/L3Z5JjBKE8

Socceroo and City star Cahill was spending his first Christmas in Melbourne came from humble beginnings in Sydney and hoped it would help people doing it tough. 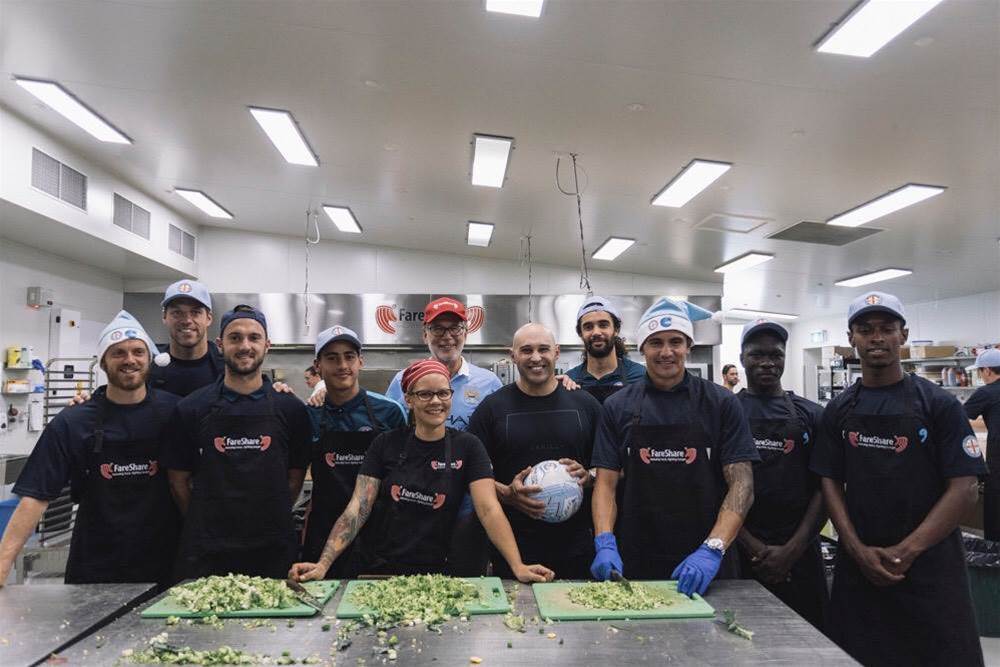 “I feel so proud to be a Melbourne City player when we do activities that benefit our community,” Cahill said.

“The community ethos at the Club is awesome, and I just hope that our contribution will help bring a little bit of joy this Christmas.”