Wellington Phoenix have become the last team to qualify for the Round of 16, APIA Leichhardt's win provided an unexpected Cupset while Sydney FC had to wait for late extra-time goals to secure their place in the Quarter-Finals.

Three FFA Cup matches were held in the last two days with some dramatic results. Two matches were Round of 16 fixtures with the third being the last remaining Round of 32 game.

More information on the FFA Cup Quarter-Finals can be found using this link.

Wellington Phoenix were able to see off Western United to book their place to the Round of 16 for only the second time in the franchise's history.  Both sides fielded younger squads with a number of players getting their club debuts on both sides.

Phoenix's win came courtesy of a Ben Waine goal in the 35th minute of play. Right back Louis Fenton sent a beautifully curled cross into the box which Waine was able to head in past Ryan Scott to make it 1-0 for Wellington.

A ripper header from Ben Waine to give @WgtnPhoenixFC the lead in Geelong!

Phoenix will meet National Premier League Victoria side Avondale FC in the Round of 16 on Tuesday, December 14, 2021 at ABD Stadium in Melbourne.

National Premier League NSW side APIA Leichhardt stunned Western Sydney Wanderers on Tuesday night in their Round of 16 clash.

The Tigers became the only NPL side so far to progress to the Quarter-Finals of this year's competition and the only NPL team to achieve two wins against A-League sides in the Cup's history.  APIA had beaten Melbourne Victory in the 2018 FFA Cup Round of 16.

The home team were the first to find the back of the net in the 27th minute through a Jason Romero goal. The American forward capitalized on a mistake by Wanderers' fullback Ziggy Gordon to score and make it 1-0 for APIA.

The Tigers then doubled their lead in the second half when Tynan Diaz scored a stunning free kick from about 40 yards away from Western Sydney's goal.

THIS IS ONE OF THE GREATEST EVER #FFACUP GOALS! 🤯

Wanderers' Tass Mourdoukoutas were able to score his side's first of the match nine minutes later in the 70th minute but Western Sydney were not able to find a second.  APIA will now meet Central Coast Mariners at Leichhardt Oval in Sydney on a date yet to be announced.

Sydney FC left it late, winning the match through two extra-time goals to beat Macarthur FC.  The fixture went ahead despite a COVID-19 positive result to Blues player Rhyan Grant early on in the week after the remainder of the squad tested negative.

The match was originally delayed an hour and a half due to weather meaning it was well past 11 PM when Sydney scored their first of the match in the 100th minute of the game.  James Donachie, who was making his debut for the club, headed in the ball to make it 1-0.

James Donachie with a goal on his @SydneyFC debut!

Macarthur's Andonis Martis was sent off two minutes later after a nasty challenge on Sydney's Adam Le Fondre.  Sydney capitalized on the one man advantage and scored their second in the 118th minute.

Grant's replacement at outside back Harry van Der Saag received a pass and was able to slot it past Bulls keeper Filip Kurto to make it 2-0 at the 118th minute.

Sydney will next meet Brisbane Roar on Wednesday, December 22, 2021 at the Nestrata Jubilee Stadium for their Quarter-Final FFA Cup match. 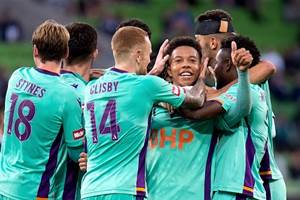 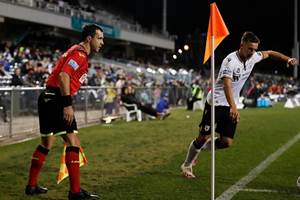 Macarthur Bulls will be returning to Campbelltown Stadium for Round Five of the competition.