SOCCEROO Robbie Kruse is honing in on becoming a first team regular after a stunning starting debut for Bayer Leverkusen in the Bundesliga, according to manager Sami Hyypia.

A Kruse-inspired Leverkusen bounced back from a mid-week defeat at Old Trafford with a commanding 4-1 performance away from home against Mainz 05 overnight on Sunday morning.
Hyypia labeled it a “very important victory” with Leverkusen now having won five of their opening six games in the Bundesliga.
The former Liverpool player made several changes with Emir Spahic, Guilio Donati, Emre Can and Heung-Min Son replaced by Phillip Wollscheid, Roberto Hilbert, Lars Bender and Kruse.
It paid off almost immediately when Kruse made it 1-0 after just 20 minutes with a neat finish from being played in one-on-one against the goalkeeper by Sidney Sam.
Kruse then turned provider for Bender, before securing a brace with another calm finish right at the end of the first half.
Leverkusen made it 4-0 just before the hour mark thanks to star forward Stefan Kiessling, with Kruse then giving way after 75 minutes.
Kruse put the performance down to his hard work and the skill of his Leverkusen teammates.
“Things worked out perfectly for me today, I’m relieved that my hard work has paid off,” Kruse told bundesliga.com.
“Obviously you're disappointed when you’re not playing often, but I was always there to support my team-mates and it shouldn’t be forgotten that I have top-class players ahead of me.”
The Socceroo only found out he would be starting the morning before the game at Hyypia’s team meeting, with the tingling in his stomach beginning almost immediately.
But now after a dream debut Kruse has the chance to cement a spot in the Leverkusen XI with the World Cup finals in Brazil approaching.
"Robbie is a good player - his chance of other games has not reduced today." said Hyypia.
Leverkusen’s next game is against Arminia Bielefeld in the DFB Pokal where Kruse is expected to keep his spot in the starting XI. 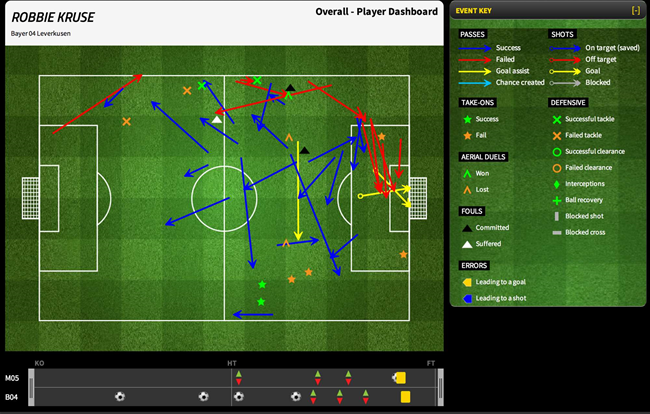 GET THE FOURFOURTWO STATS ZONE APP FOR YOUR iPHONE HERE