Melbourne Victory coach Marco Kurz has defended his foreign signings and is confident the A-League side can turn things around as they get key players back.

Historically, A-League clubs that have got their foreign signings right have put themselves in contention for the title.

With Victory picking up only five of a possible 18 points from their opening six games, the club's visa signings have come under the spotlight.

Midfield recruits Jakob Poulsen and Kristijan Dobras have experienced patchy form, with Dobras coming off the bench late in Victory's past two games.

Kurz said Dobras had some "issues with fitness" and emphasised his whole team needed to lift, not just their visa signings.

"I think it's not fair to speak about the foreigners only," Kurz said on Friday.

"I think we have to improve and develop as a team and I think everybody can make it better. And that's what we have to show."

Kurz said he accepted criticism of his side's poor start but believed the relatively late compilation of the squad had contributed to their struggle to gel.

"I understand the criticism because the results are not good enough and that's normal and I'm not surprised about (it)," Kurz said.

"But I think we must see the whole situation - the late signings, the group came together very late and they are different points - it's not only one point.

"But I agree that we have to develop in all areas to be better because at the moment it's not good enough for Victory."

Andrew Nabbout will return from a hamstring injury while German defender Tim Hoogland could get his first A-League minutes, having recovered from a quad injury suffered on the eve of the season.

The inclusions have left Kurz confident his team can begin to turn the corner, starting with Saturday night's game.

"It's our goal and it's our job to return and to fight back in a better way with results, with points, we are a passionate club and it's a tough situation for all of us - for the players, for me, for the coaches but also for our members and fans," Kurz said.

"And we must find or we want to find the return and I think it's a good game tomorrow to play a good game and then you have the chance to get a result." 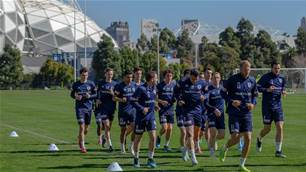