Adelaide United's Ben Halloran insists the impending exit of coach Marco Kurz doesn't change a thing as the side aims to cement a top four finish.

Kurz won't be back at Hindmarsh next season after Adelaide bosses decided not to renew his contract.

The debate over his future coincided with a dip in form for United which saw them go without a win after the first weekend in February until the end of March,.

But morale-boosting wins over Central Coast Mariners and Wellington Phoenix and a draw with Melbourne City have put them back in contention for a top four finish.

And today Halloran insisted the upheaval won't distract them from the task in hand.

"It's not like Marco getting the sack and not being here next season means that all of a sudden we don't want to win the final," said the midfielder.

"He's ambitious and so are we, so I don't think it really changes anything.It didn't really play much of a role. We found out Marco was leaving after the patchy form and we've really turned things around since.

"Credit to Marco, he's remained very professional. He's done great things for the club and we've got the same goal in mind and that's to make the final, make a home final and then go as far as we can."

He admitted to have been dismayed by the new of Kurzo's exit.

"Initially I was a little disappointed," said Halloran. 26. "I've really enjoyed working with Marco but ultimately it's the club's decision. I can't control it. It's out of my hands."

With two games left to play in the home and away season, Adelaide are just one point ahead of Wellington Phoenix and Melbourne City as they vie for the fourth spot on the leader and a home game in the opening match of the finals series.

They face a stiff fight against Melbourne Victory this weekend who are looking to stash second spot from Sydney, before facing Brisbane Roar in the final round.

Halloran added: "Football changes pretty quickly - you win a couple of games and all of a sudden you're in form." 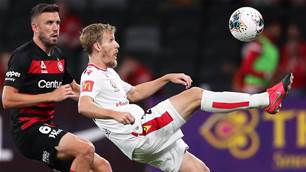