Under pressure Melbourne Victory head coach Marco Kurz has questioned the instant red for Kristijan Dobras after an aerial challenge saw his studs rake down the front of Wellington Phoenix's Cameron Devlin.

Ten man Melbourne Victory played out a spiteful 0-0 A-League draw with Wellington at AAMI Park which looked set to be turned on its head in the 60th minute when Dobras was sent off.

Just outside his defence, Dobras leapt under the ball and tried to kick it but, as he landed, his boot caught Cameron Devlin in the chest.

The midfielder was already on a yellow card but was given a straight red card by referee Stephen Lucas.

"Two reasons - because he played with the side (of the boot) and not in this direction (with studs up facing forward) and he touched him when he came down and the opponent is not the tallest. 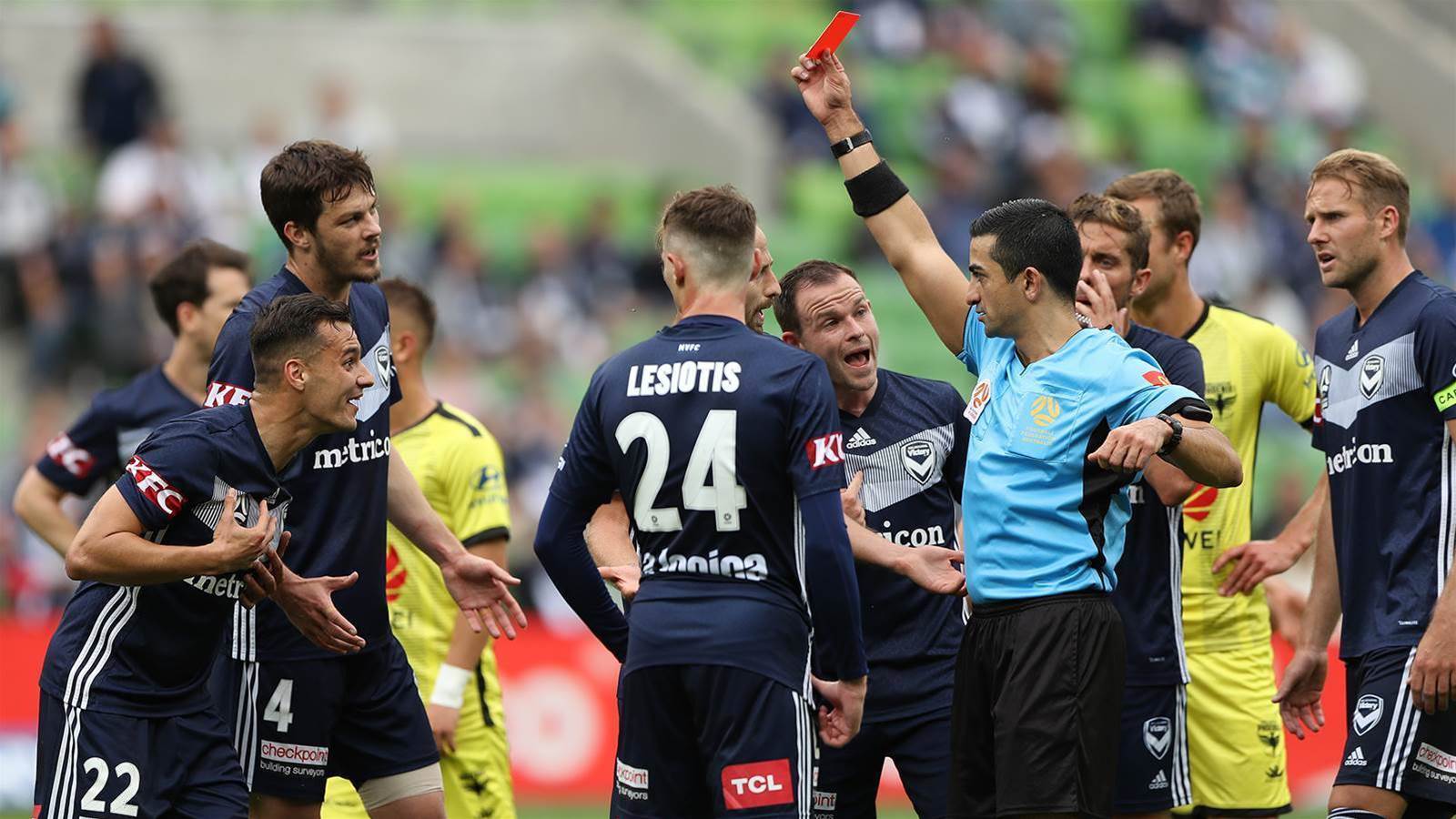 The import visa player was also one of seven Victory players booked - along with three Wellington counterparts - in an ugly, fiery clash largely controlled by the Phoenix without reward.

But Wellington failed to make the most of their numerical advantage and the home side held on.

"I thought we dominated Victory from the first minute to the 90th minute. I thought we played some really good football away from home," Wellington coach Ufuk Talay said.

"I think we didn't create as many chances as we would have liked to but I thought we were the best team tonight."

Wellington controlled much of the first half but Victory's best chance came in the 17th minute when Ola Toivonen chested down a ball from Andrew Nabbout and forced a diving save from Stefan Marinovic.

The visitors should have capitalised on a poor turnover from James Donachie in the 28th minute. The defender sold Migjen Basha into trouble, with Jaushua Sotirio pinching the ball - only for the winger to pick the wrong forward option and allow Victory to scramble away to safety.

In the 45th minute, Victory had a good opportunity when Anthony Lesiotis found Robbie Kruse back-to-goal. The winger picked out Dobras, whose shot clattered off the post.

As the first half wound down, Sotirio dragged down Kruse just outside the box but Toivonen pulled his free kick wide.

Phoenix almost took the lead in the 52nd minute.

Luke DeVere's header from a corner kick hit the crossbar and bounced on the line, with Adama Traore clearing it and Matti Steinmann blasting a shot over the bar.

But Wellington failed to make the most of their numerical advantage in the remainder of the game and the home side held on.