Melbourne Victory coach Marco Kurz was so incensed by the two late penalties that cost side against Central Coast Mariners that he was red-carded in the dying minutes.

But moments later he was measured, ruing missed chances and a lack of smarts to maintain their lead in stoppage time at Gosford on Sunday night.

"At the end you are 2-1 winning, you must be smarter and cleverer to bring the game home with the three points and that's the reason we are really disappointed," he said after his side lost 3-2 to the hosts.

It was the first time since 2013 the Mariners had defeated Victory in the A-League.

However, Kurz denied his side was complacent against the 10th-placed team.

"We have full respect for every opponent," the German said.

"We know that the Mariners have a good style of play. Also they change a lot of time the tactical line-up, that it's not easy to play against them.

"We want to be better, we wanted to score more goals and we didn't. That's the reason that we lost the game."

The loss pours cold water over Victory's back-to-back wins over Melbourne City and Newcastle, and sets them up for a tough trip to Adelaide with a short turnaround.

United have lost their past four games but Kurz said Victory will need to prepare well.

"It's similar to the weeks before, we have a good analysis of the game. We have to recover well because our next game is on Friday, it's close," he said.

"We have to set up in the two sessions that we will have the tactical spots for Adelaide.

"It is not the first and it won't be the last time we've lost a game.

"We must keep going. We must analyse and find the right solution." 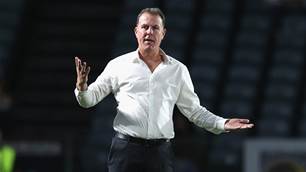