Former Socceroo James Holland is entering a new peak in his career as a stalwart for the next big thing in the Austrian Bundesliga.

In his first 12 months as a professional footballer James Holland became the youngest player to score in the A-League (in his debut match), won an A-League Championship and played for the Socceroos.

He showcased excellent attacking skill yet still retained calm concentration, which would foreshadow his gradual shift towards a defensive mentality as his career wore on.

He was quickly pegged as the next big thing and shot off to Dutch side AZ Alkmaar.

But in three years, under coaches Louis van Gaal and Dick Advocaat, he failed to make a single appearance.

But rather than falter or fade, in 2012 Holland arguably made the best decision of his career - at least until now.

He took up a role in the Austrian Bundesliga with Austria Wien, a club that was outside of continental competition and still in transition from its rebranding five years earlier.

This was a lifeline for the Australian. In his second season at Wien, Holland played 34 league matches, won the Championship, and was soon facing clubs like FC Porto and Atletico Madrid in the Champions League.

Once again, fulfilling his lofty potential appeared promising. But in 2013 the cautious style Holland had developed throughout his Europoean journey didn't fit within the Socceroos gung-ho philosophy under new coach Ange Postecoglou.

Despite becoming a leading figure within the Austrian Bundesliga and Ange's insistence on scoping far and wide for talent, Holland registered just over 100 minutes of game-time throughout Postecoglou's entire reign.

His 15th and final match for the Socceroos was 15 minutes in a 0-0 draw with the United Arab Emirates over four years ago.

The midfielder then returned home at what should have been his physical peak, briefly re-entering the spotlight during a short spell at Adelaide United in 2016, but was largely underwhelming - he failed to gel with Guillermo Amor and the Reds slipped to ninth place. 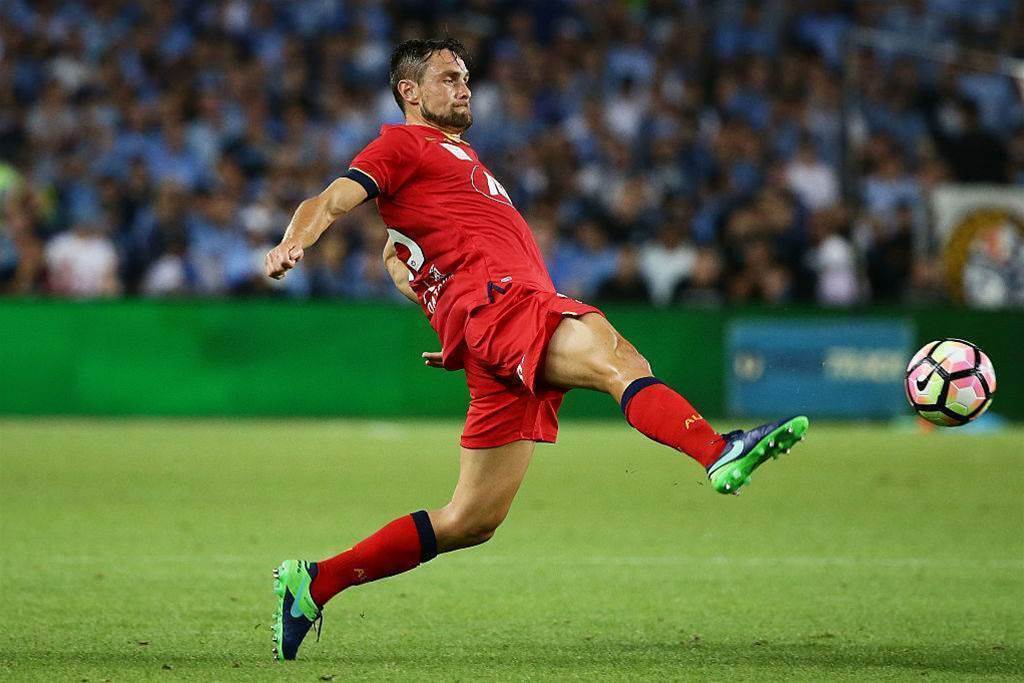 Holland during his spell with Adelaide United

An even-worse spell in China followed, and it seemed for a moment as if Holland's career was waning to an unfortunate end.

But just as Austria salvaged his future in 2011, it has again in 2018. LASK Linz - a historical yoyo club and one of the Bundesliga's smallest, with an average crowd of just over 4,000 people per match - is rapidly heading towards success.

Two seasons ago they were playing in Austria's second division, but after promotion in 2016/17, they shot straight to fourth and the Europa League qualification rounds (they only lost to heavy-spending Besiktas on away goals).

This season Holland has proven influential in leading the club to second place, once again, only behind the similarly well-resourced Red Bull Salzburg.

Naturally laid back, yet with an air of confidence born from overcoming adversity (van Gaal once told him he was "too old to learn") Holland's now reached that dangerous age where he knows exactly where his strengths lie as a footballer.

"I’m a winner and a natural leader,” he told Squawka. “My game is relatively simple. Defensively I’m strong. Tactically I consider myself decent.

"I’m able to read the game and close the holes well and do what the team needs me to do.”

The 29-year-old has played 90 minutes ever game bar two this season, making him one of the most regular performing Aussies in Europe – and Holland still has a Socceroos recall at the back of his mind.

"In my opinion there is nothing better in football than to represent your country," Holland recently told World Football Index. "It is the pinnacle.

"Of course I love playing club football but playing for Australia is fantastic.

"I would love to still be involved with the national team again in (the) future because it is something so special."

There may have even been a small element of jealousy for Holland watching James Jeggo, who plays for Holland's old club Austria Wien and sits three places below LASK in the Bundesliga, make his Socceroos debut against Lebanon.

But even if Holland's solid yet unspectacular skillset is unable to work its way into a Socceroos lineup overflowing with midfield maestros, he can serve as a substantive role model for Australian footballers overseas.

He's pushed through devastating moves as a youngster, doubtful egomaniac coaches, a harsh return home to the A-League and an injury hit season towards the latter stage of his career to once again prove himself a pillar of high-performing consistency in European competitions.

If Holland is a forgotten man, perhaps he shouldn't be. Australian football might have a lot more to learn from footballers like him then we think.