Souttar had returned to the United Kingdom after rupturing his anterior cruciate ligament in Australia.  A wait period needed to pass prior to the surgery in order to allow for the knee to settle. The Socceroo has since gone under the knife.

He was operated on and is being taken care of at the same clinic and by the same surgeon in London who repaired Liverpool's Virgil van Dijk's ACL last October.

The injury abruptly stopped Souttar's rise in Stoke City and the Socceroos defence, one that had led to interest from a number of Premier League teams. Stoke City head coach Michael O'Neill spoke recently to the Stoke Sentinel about the loss of Souttar and his recovery:

"Harry will get the best care. David White is head of medicine here and has made sure that he is going to be extremely well looked after.

"It's always difficult as a young player when you're establishing yourself at the club.

"And obviously, Harry has done that in the past 18 months, he's been captain of the team as well, and in the absence of Joe (Allen).

"There's been a lot of things that have been on a very awkward trajectory and in terms of where he is at this moment in time, but one thing I think he is aware of, his brother, who incidentally plays in Scotland, has had some difficulties with injury as well.

"He's obviously seen that and he's seen how his brothers had to deal with it. And he's had to support his own brother through that.

"And all of that as necessary in terms of the rehabilitation process that he has to go through."

Souttar himself posted a post-operation picture on his personal instagram to which his club wished him a speedy recovery.

In general it takes footballers an estimated seven to nine months to fully recover from this type of injury meaning Souttar should be fit for the 2022 World Cup should the Socceroos qualify. 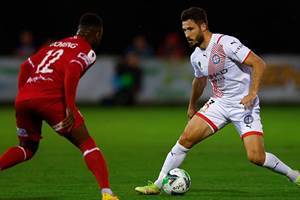 No Cupsets as A-League teams progress in FFA Cup