Former Melbourne Victory Medallist Adama Traore has returned to the club on a one-year deal.

Traore, 29, made 52 appearances for Victory between 2012 and 2014 before he ventured overseas in a career that saw win national trophies and compete for the Champions League and Europa League.

But after he was signed for Victory by new coach Marco Kurz, the fan favourite said today: “I’m pleased to be back and can’t wait to get started with the rest of the group.

"I have very fond memories of my previous time at the club and am looking forward to playing in front of the best supporters in the league once again."

He added: "Marco has spoken to me about the style he wants to play, which as an attacking full-back, is something that excites me.”

The defender won three consecutive Swiss championships between 2014-17 and a Swiss Cup title in 2017. He was also a regular in FC Basel’s UEFA Champions League 2016/17 campaign, and part of the team that made the last 16 of the UEFA Europa League in 2016.

Following his time in Switzerland, Traore moved to Turkish Super Lig side Göztepe, where he made 27 appearances.

On the international stage, Traore has represented the Ivory Coast 12 times, including appearances at the African Cup of Nations in 2017, despite gaining Australian citizenship in 2013.

Kurz said Traore’s return is an exciting prospect for the club.

“When the opportunity presented itself to bring Adama Traore back to Melbourne, we absolutely wanted to make that happen,” said Kurz.

“Adama is an experienced player that has proven himself in Europe and at Melbourne Victory previously, and he will add a lot of quality to our backline.

“We look forward to welcoming him back and finalising the rest of our squad for the season soon.”

Traore arrived at the club today and is expected to start training immediately. 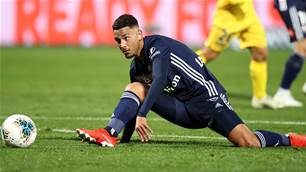