Perth Glory coach Kenny Lowe is ignoring the boo boys calling for his sacking after his side slumped to their third straight defeat going down 2-0 at home to Melbourne City on Tuesday night.

Glory fans were heard chanting “we want Kenny out” in the second half of the loss, which means Perth have conceded 11 goals and not scored one in their past three matches as they slided outside the top six.

Perth owner Tony Sage had told 6PR on Monday that Lowe would remain coach until the end of the season, but the pressure is mounting after the latest defeat.

Lowe, who has been Glory coach since December 2013, was asked about the crowd’s reaction, but seemed oblivious to the negative feelings.

“The crowd is great for us. If we’re honest and genuine and we work ever so hard, which we do, the crowd supports that,” Lowe said.

“They’re excellent, they always have been, they always will be. No matter which way the game is going, if you give that, they’ll be 150 behind you and they were tonight, you could hear them.

And there’s the very audible “We want Kenny out” chant, not that it’ll make a difference. #PERvMCY

“A bit of fortune here or there, you can be more in the game, you pinch something, Xavi (Torres) has a strike, keeper doesn’t know where it is, Cas (Diego Castro) has gone through a little one over the top, convert that into a goal and the momentum starts to come again.

“We were controlling the game in the second half.”

Lowe also claimed City’s penalty award for their second goal was “soft” after youngster Daniel Arzani went down inside the box under pressure.

The Glory boss felt referee Jarrad Gillett had made a “few crazy decisions” during the match.

“They’re saying to me ‘there was contact’, then great, if that’s how it is, then there’s contact on Jacob too, so it’s a pen.

“There was contact on Tags (Adam Taggart) as well, he got pushed from behind, that’s contact, that’s a pen. 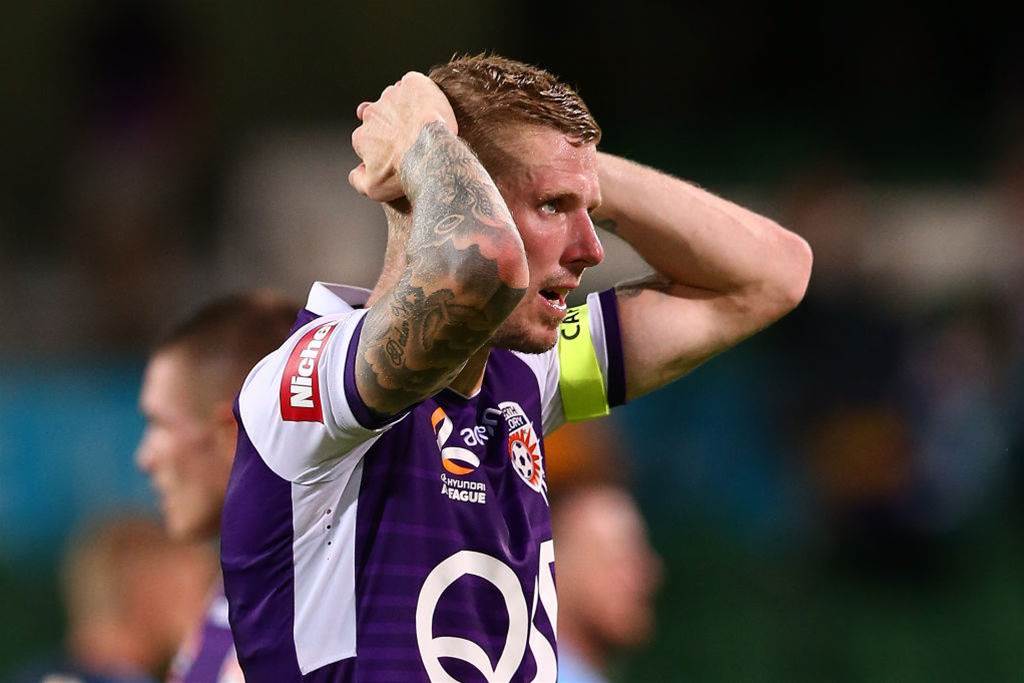 Andy Keogh feels the pressure of another defeat

“I thought there were a few crazy decisions.

“The one we got pinged for Cas, he’s actually in, behind the back and they brought it back.

“But that’s the cards for us at the moment. That’s the way things seem to fall for us.”

Lowe also revealed he had been forced into a defensive re-shuffle with defender Jacob Poscoliero taken to hospital in the early hours of Tuesday morning due to a virus which left him vomiting.

Poscoliero was discharged from hospital on Tuesday, but it left Lowe short of options with Joseph Mills unable to prove his fitness to play due to a neck injury.

Xavi Torres and Scott Neville both returned early from injury, given Glory’s shortage of options.

“Andreu should’ve come off the bench. It shows the spirit in the group.

“The players are sacrificing for the team. They’re putting it in.”