Perth Glory coach Kenny Lowe says he’s just happy to enjoy the ride as his improving side closes in on the Hyundai A-League’s top four.

Lowe’s men made it five games without defeat on Saturday night when late goals from Nebojsa Marinkovic and Adam Taggart earned a come-from-behind 2-1 win over Melbourne Victory.

“We’ve had a bit of a topsy-turvy season and there are reasons for that. But I think now you can see there is a real spirit amongst the guys.

“We’ve got Tags fit and Keogh and Castro. We’ve just got to make those guys stay well and healthy.

“I just want our lads to enjoy themselves honestly and see where we end up.”

“If we chucked Nebo in [attack] it would be like wagons in a circle for our back four,” he said.

“It would be like a scene from Zulu, they would be coming over the hill at them.

“It’s really difficult to fit all those guys in but Nebo is such a professional guy, he’s not moaned, he’s just got on with it. He’s just a joy.” 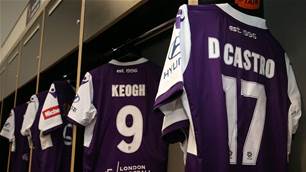