FRANK Lowy has been re-elected chairman of FFA but revealed an operating loss of around $800,000 due to FFA having to bail out a number of A-League clubs.

At today’s AGM, Lowy, 81, was re-elected for another four years and said the game’s governing body made a small profit of $3.8m in the last year.

However that profit was washed away by the national governing body having to take over several A-League clubs, including North Queensland.

But he was adamant the days of bailing out clubs were close to being over.

“This is not a sustainable approach,” he said.

And at today’s announcement, the FFA CEO Ben Buckley outlined the vision for the next phase of the game’s development over the coming four years.

He said the vision for the game was to become a top ten world football nation in terms of developing a "football culture ingrained with unique Australian characteristics, making football a social and sporting powerhouse in Australia.

"And building an Hyundai A-League that rivals the best in Asia."

While trumpeting increasing crowds, TV ratings and grassroots numbers, Buckley stressed the importance of capital to fund the plans.

And he made his pitch to TV stations to back a code he said had “the biggest reach with a national footprint that had its own unique growth story.

“We are building a compelling case,” he added.

Key points from today’s announcement include:

* There will be a “greater role” for second tier clubs over the next four years, said FFA CEO Ben Buckley.

* FFA to push the “MyFootball Club” grassroots online registration rollout, which Buckley said would be a “game-changer” for the code’s development. 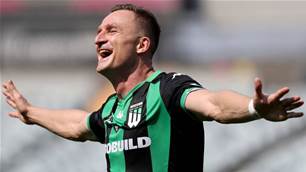