LUCAS Neill has been released for the second time in a year with United Arab Emirates club Al Wasl confirming on Twitter this morning that they had axed the Socceroos captain.

With UAE clubs only allowed four imports, including one spot restricted to players from other countries in the Asian Football Confederation, Ibrahim will replace Neill, while Egyptian forward Shikabala will leave to make way for Ferreira.

Neill's release comes just eight months after he was cut by UAE's Al Jazira and throws his club future in doubt with the January transfer window almost closed in Europe.

While Neill has avoided a return to the A-League so far in his career in favour of more money in the Middle East, the transfer window in Australia will remain open until midway through February and may be his only option.

The former Blackburn, West Ham and Galatasaray man was linked with a move to Tianjin Teda last month but with ex-Brisbane Roar midfielder Erik Paartalu having signed with the Chinese Super League club, a move there seems unlikely.

Neill’s agent, Darren Jackson, denied reports of a $1million one-year offer from CSL side Tianjin Teda but admitted there was interest from other clubs.

Jackson told Sport 360 in December: "There is nothing to it. We've had no contact from Tiajin and Lucas hasn't heard anything either.

“There has been interest from other clubs, but for the time being Lucas very much remains a Wasl player and is committed to the club."

The 34-year-old defender played 11 games for Al Wasl but fell out of favour when Bruno Metsu quit as head coach in October having been diagnosed with stomach cancer.

Neill was a surprise inclusion in the 2012 Asian Football Confederation Payer of the Year shortlist and just yesterday was named in the Socceroos squad to take on Romania in a friendly next week ahead of the World Cup qualifier against Oman in Sydney on March 26.

But it has been a turbulent period for Neill since leaving West Ham United in 2009, notching up stints at Everton and Galatasaray before heading to the Middle East. 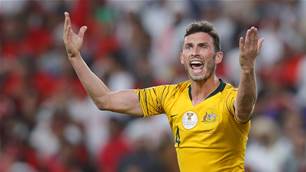