Every Aussie fan knows Awer Mabil is big news Down Under, but they may not know he's got some friends in high places as well. 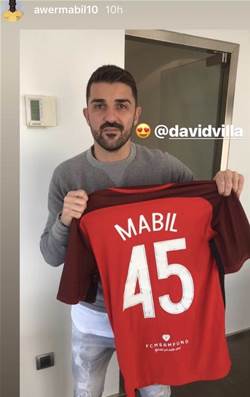 Spanish superstar David Villa is a big fan of the Aussie youngster, posting multiple photos and exchanges on social media with the 23-year-old.

He even uploaded a photo with Mabil's Midtjylland shirt.

Exactly how the two became quite so closely acquainted is uncertain, however, but they did face each other during Villa's short spell in the A-League when Adelaide United clashed with Melbourne City  in November 2014.

Villa was one of the first to congratulate him on his stunning strike against Syria in the Socceroos' last group stage match.

Mabil has made an incredible impact upon the football world this season with his community and charity work, in addition to his footballing prowess.

The Socceroo won the 2018 FIFPro Merit Award for his work with the charity he and his brother founded, Barefoot to Boots.