New club Macarthur FC have gone top of the A-League with imports Loic Puyo and Matt Derbyshire scoring in a 2-1 away win over the Newcastle Jets.

Macarthur coach Ante Milicic expects more good moments from imports Loic Puyo and Matt Derbyshire, after they both scored their first A-League goals to help the fledgling club to a 2-1 win at Newcastle and go top of the league.

Puyo's spectacular and acrobatic bicycle kick in the ninth minute from near the penalty spot, opened the scoring in Sunday's clash at McDonald Jones Stadium and he added an assist later in the half.

The Frenchman's perfectly-delivered near-post corner enabled Englishman Derbyshire to notch the second goal with a powerful near post header in the 23rd minute.

Macarthur was on the back foot for much of the final hour and survived extreme second-half pressure, after impressive Jet Valentino Yuel also scored his first A-League goal just before the break.

"The second half we stopped playing, we were hiding," Milicic said.

Socceroos goalkeeper Adam Federici pulled off three second-half saves and Newcastle had a handball claim for a penalty in added time rejected by referee Ben Abraham.

It was Macarthur's second win from as many away games and gives then seven points from four matches, while Newcastle are still pointless after suffering a third straight loss.

Derbyshire hit the post and had another good attempt near the end.

"He's doing an excellent job for us and I think now that he's scored his first goal, I wouldn't be surprised if he goes on and starts scoring a bit more regularly," Milicic said

He wasn't surprised by Puyo's sublime strike either, saying that he saw the player's quality at training and that he was a fantastic professional.

"He'll get fitter, he'll get stronger, he'll understand this Australian league as the days go by, as the games go by, so we're looking for him to improve as we move forward," Milicic said.

While Macarthur's lofty league position is a trifle misleading given they have played more games than every other club, Milicic emphasised they were far from the finished article.

"We're nowhere near our best, we know we will improve," Milicic said.

As was the case in their previous losses, Newcastle played some good football, but not for long enough.

Coach Craig Deans said the Jets had to live with the late no penalty call after the ball clearly hit the hand of Macarthur midfielder Denis Genreau.

"Because he played at the ball and it flicked his leg, then it doesn't matter if it hits his arm, so I find that confusing but it's the rule and I can't change that," Deans said.

"It's cost us a point, but we can't rely on things like that.

"We had enough chances to score, we had enough ball in the right areas to create more chances and score more goals." 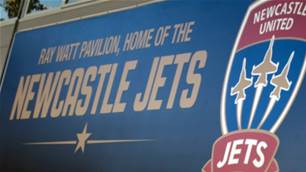 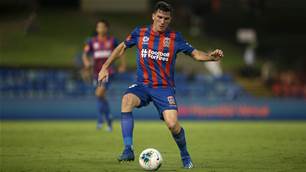