Diego Maradona believes Germany can finally triumph over Italy when the two sides meet on Thursday in the Euro 2012 semi-finals.

Italy have had the upper hand in recent encounters against the Germans, most memorably beating them on their own patch in Dortmund at the 2006 World Cup.

Despite this, Maradona believes Germany's new generation of young goalscoring midfielders will allow them to beat their old rivals - and is of the opinion that they are favourites to win the tournament.

"Germany's young superstars (Mesut) Oezil, (Sami) Khedira and (Thomas) Mueller have matured over these years and it shows," Maradona wrote in The Times of India.

"Their young midfield and ease of scoring make them the favourites to win the tournament, although they must face their bete noir Italy in the semi-finals.

"If they ever have a chance to change their luck versus the Azzurri, this is it.

"(But) Germany will do well not to underestimate them."

While tipping Germany to make the final in Kiev, he also praised Italy coach Cesare Prandelli for getting an Italy team on their knees to the semi-finals.

"Very few people expected anything of Italy in this Euro championship," he said.

'I don't think we were very good...' - Matildas hammered on return 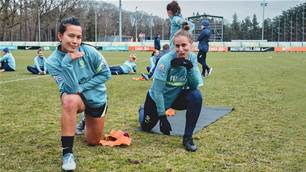