Central Coast Mariners winger Tommy Oar may not play for the A-League strugglers again with coach Alen Stajcic revealing the ex-Socceroo is battling a "chronic" injury.

Oar was a notable absentee from the Mariners squad for Friday's 1-0 loss to Brisbane Roar at Suncorp Stadium.

A 2015 Asian Cup winner with the Socceroos, Oar's career has been undermined by injuries in recent seasons.

He managed just 11 matches last summer for the Mariners before a knee injury prematurely ended his first campaign with the Gosford-based club.

Despite making 15 appearances this season, Oar hasn't started a game since the start of February and was last on the pitch as a second-half substitute in a 3-0 loss to Sydney FC on February 23.

"He's got a chronic injury. We're just managing him now," said Stajcic, who refused to go into specific detail of the injury.

"He's had it for about four or five weeks now."

Friday's narrow loss to Oar's former team was the Mariners' ninth in a row and leaves them rooted to the bottom of the A-League ladder.

With Oar to join expansion outfit Macarthur FC at season's end, Stajcic admitted it was unclear if the 28-year-old would return to help the Mariners attempt to avoid a third-straight wooden spoon.

"He's such an important player to our team," Stajcic said.

"To not have him here and not have him for the last period of time has been certainly a big blow to our team to have one of our marquee players not available.

"We've got to manage him and try to get him on the pitch for whatever we can in the last part of the year." 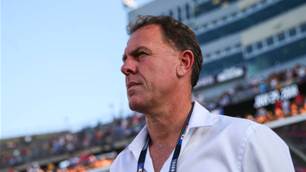