Central Coast have finally broken their losing streak with a scoreless stalemate in Gosford, putting a major dent in the A-League semi-final hopes of local rivals Newcastle.

The 0-0 result leaves the Mariners avoiding sole ownership of the competition's record losing streak, with their 11-game run matched only by former A-League club New Zealand Knights 15 years ago.

While the Mariners took some solace from their 50th local derby, the Jets missed a much-needed chance to claim three points and maintain momentum in their semi-final charge.

While the Jets move to just two points off the top six, a host of fellow aspirants boast multiple matches in hand.

A contest of limited goalscoring opportunities on Friday night at Central Coast Stadium only sprang to life infrequently.

The Jets were rarely able to match the intensity on display in last week's surprise last-minute win over runaway leaders Sydney FC.

Newcastle bossed possession for lengthy periods - especially in the first half - but, in reality, there was little creativity on display from the visitors.

The Mariners made two changes from their last outing - a 1-0 loss to Perth - with highly regarded teenager Alou Kuol looking lively in his starting debut.

There was plenty of industry in the first half although very little to trouble either goalkeeper, despite the Jets' dominance of possession.

Jets' recruit Bernie Ibini again impressed, with the former Socceroo fashioning two notable strikes as the visitors made regular incursions down a porous Mariners left side.

Kosta Petratos must have thought he had found the opener with nine minutes remaining, but Mariners goalkeeper Mark Birighitti produced a superb reflex save from almost point-blank range.

The Mariners found most spark in the dying minutes and, while there was no winner, the league's bottom team finished the happier of the two sides. 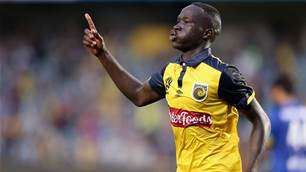 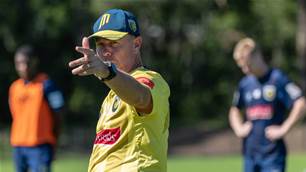