Central Coast Mariners pair Ruon Tongyik and Abraham Majok are part of a large contingent of Australian-based players named to play for South Sudan next month.

The duo are two of 12 Australian-based players named in a preliminary 32-player squad for the Bright Stars' Africa Cup of Nations two-legged preliminary round tie against Seychelles.

Tongyik and Majok, who have represented Australia at under-23 level, join Melbourne Victory striker Kenny Athiu in the squad along with several players based at National Premier League clubs.

Athiu made his debut for South Sudan in a World Cup qualification tie against Equatorial Guinea earlier in September.

Sudanese-born Tongyik, 22, joined the Mariners in May having already had stints at Adelaide United, Melbourne City and Brisbane Roar.

Majok, 20, is also a new arrival at Gosford after joining the club following his release by Western Sydney Wanderers in May.

The two matches against Seychelles are scheduled for October 7 and 15, meaning Tongyik, Majok and Athiu will miss their clubs' A-League openers on October 12 if they are named in the final squad. 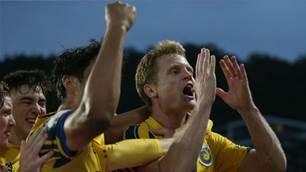